Taking the No 15 bus from Whitechapel to the Fetter Lane was a very good idea as the rain poured down in torrents. Comfortable in the warm moist interior it was fun to watch the lunch-time workers struggling with inside out umbrellas, fly away hats and vicious gusts of wind from all directions. I suffered the same fate as soon as I stepped off the bus, rushed in to Starbucks for shelter and coffee, and then stepped out into the storm again. By the time I arrived at the Silver Vaults the top of my take-out was full of rainwater!

The visit to the Silver Vaults was organised by Augusta currently studying to be a City of London Guide, and she had arranged for us to meet Steven Linden who is Secretary of the Silver Vaults Business Association and Director of Linden & Co (Antiques) Ltd - Vault 7.

The London Silver Vaults opened as The Chancery Lane Safe Deposit in 1876. Originally renting out strong rooms to hold household silver, jewellery and documents, it transitioned to housing silver dealers in secure premises a few years later. One vault was used to store a farthing, with the owner paying over £100 over the years for the vault.
With 1.2 metres (3.9 ft) thick walls lined with steel, the vaults were never broken into. The building above the vaults was struck directly with a bomb during World War II - however this did not damage the vaults at all, despite the building being destroyed. A new building, Chancery House, was constructed ten years later, and since 1953 it has been in its present format, with shops based underground. All the shops have been owned for at least 50 years by the same families. It said that it has "the largest single collection of commercial silver for sale in the world", contained within more than forty shops.
Mr Linden showed us around the two corridors with fascinating displays of all kinds of treasures, mainly silver, but the Vaults also sell jewellery and stamps, among other exciting things.
The public are more than welcome to visit at any time and the owners and staff are happy to talk to you about items of interest.  It is also an excellent place to go for that special gift.
We spent a an interesting time looking at a silver Porringer (yes you can eat porridge out of silver) and a Georgian gravy jug. The hallmarks on both were unusual and fascinating, including a mark recording a monarch's jubilee, the maker's mark, the year, plus assay marks for London and England and much more. Also discussed the unfinished underside of the base of the jug, which proved its provenance even more than the hallmarks. The discussion moved on to the properties of a silver teapot to make the best tea over porcelain and the visit ended with being shown a rare C18th tool for good tea making, sadly we could take no pictures so will have to leave you guessing as to what it was until you visit the Linden vault.
If you would like to visit the vaults with me get in touch, happy to organise a Group Tour.
missbtakesawalk@gmail.com

For information about the City of London hallmark the leopards head and the interesting question of why it appears 'crowned' and 'uncrowned' read on http://www.bexfield.co.uk/thefinial/v13-04/pg12.htm

After enjoying the procession to St Botolph without Aldgate I thought I might have a wander around before my next appointment in Chancery Lane. So I went in the direction of Whitechapel exploring the area and soon came upon the Whitechapel Bell Foundry. Exploration was stopped short due to the incessent downpour, hopped on to the No 15 bus and went on to my appointment at the Silver Vaults. 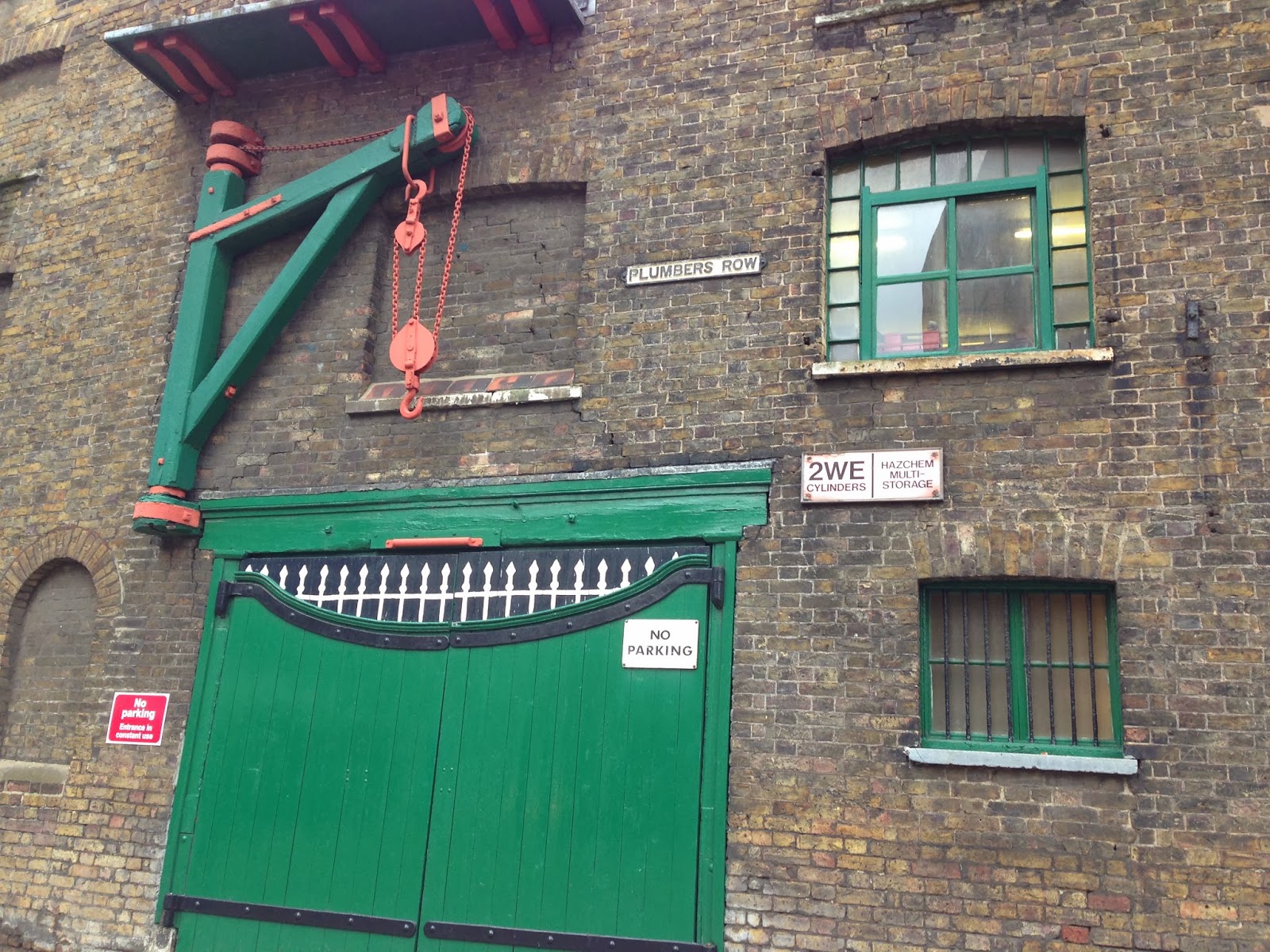 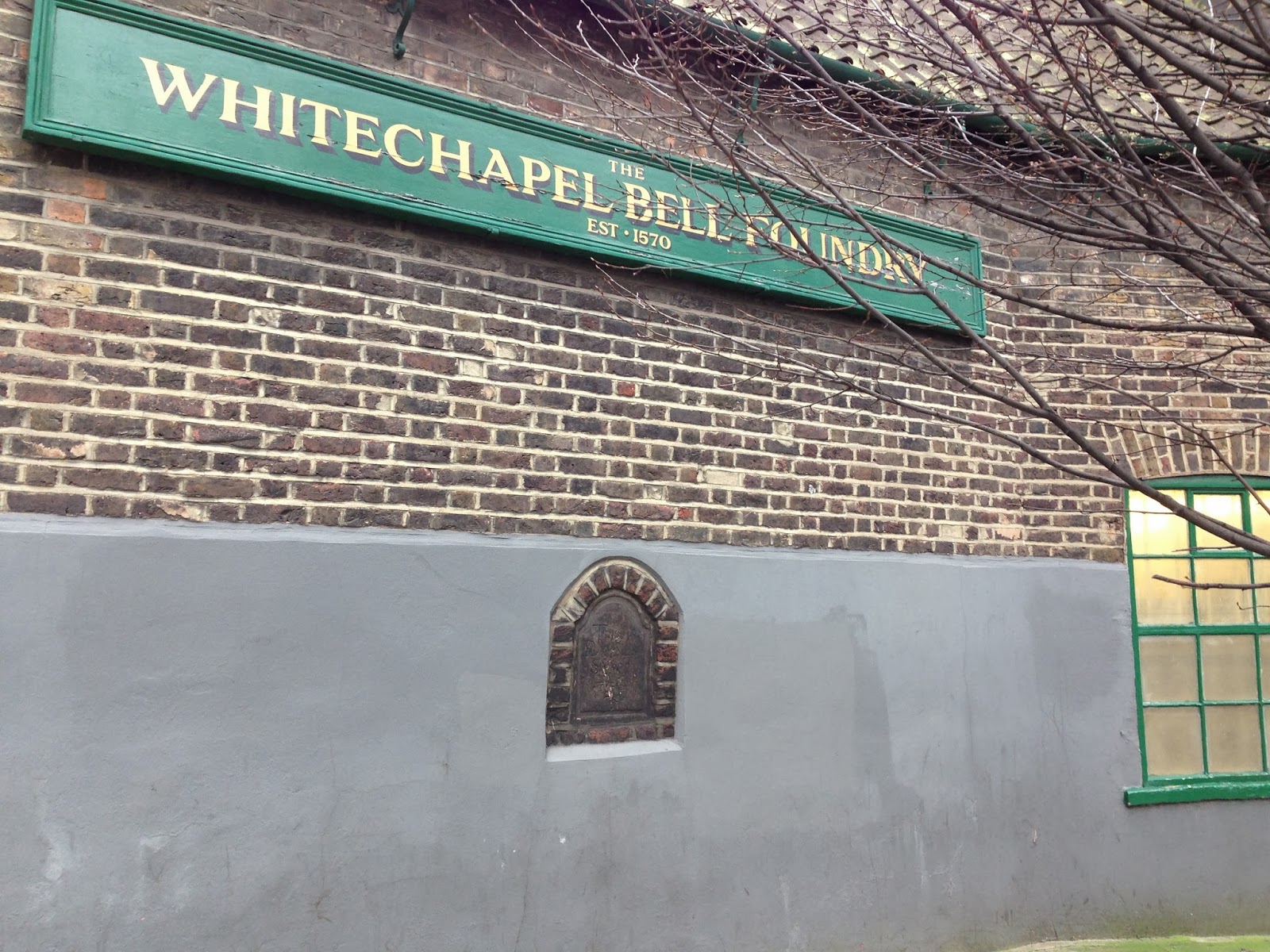 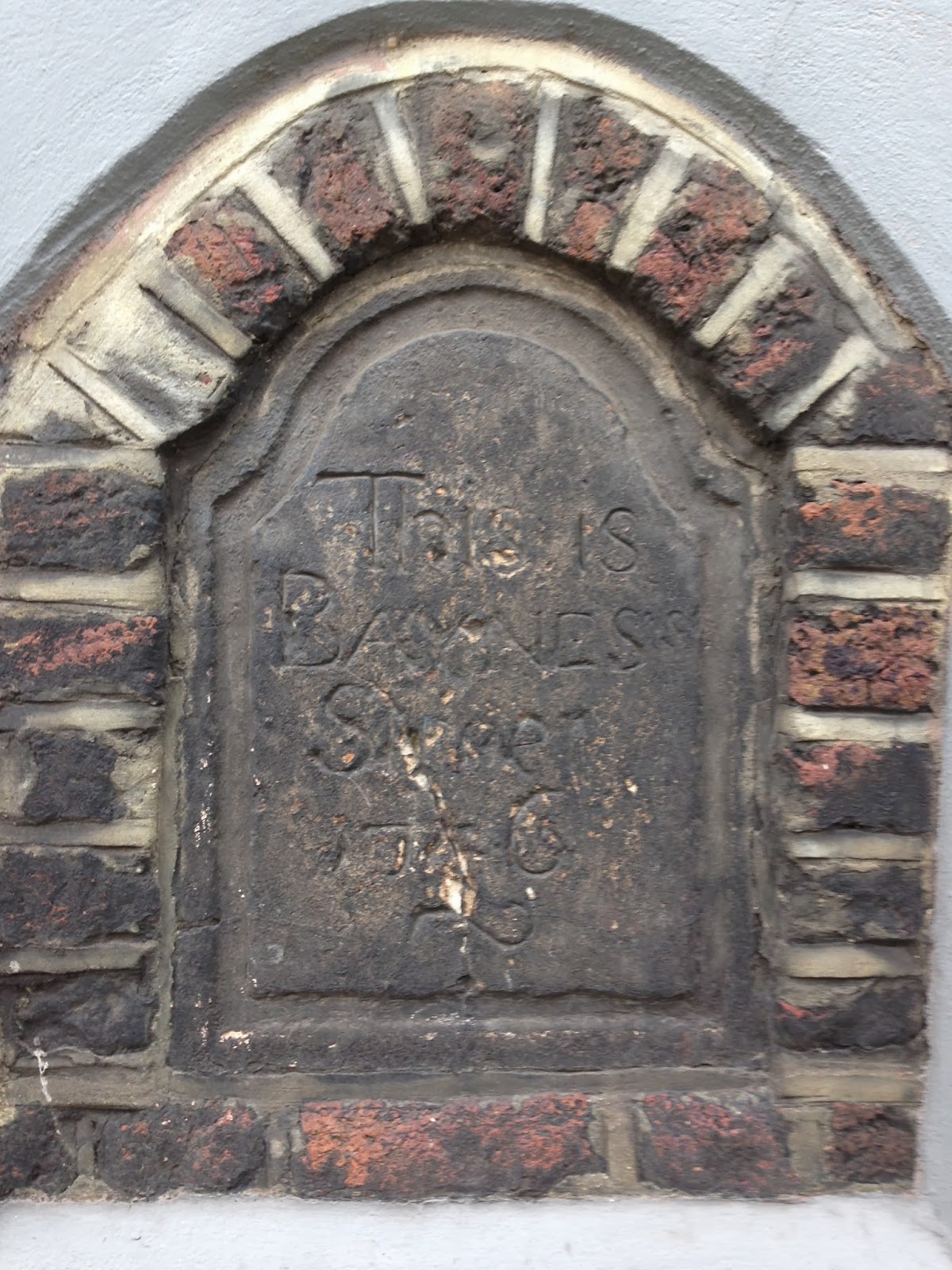 The rain held off just long enough for this special day to go without a hitch!  The church of St Botolph without Aldgate was filled to bursting point with eager young children all smartly turned out and sporting their 'red feather' in honour of their Founder, Sir John Cass.  The feather represents the quill pen steeped in blood, due to his untimely demise whilst signing his Will. The Will was contested but the Foundation won and has continued for evermore. Read more below. 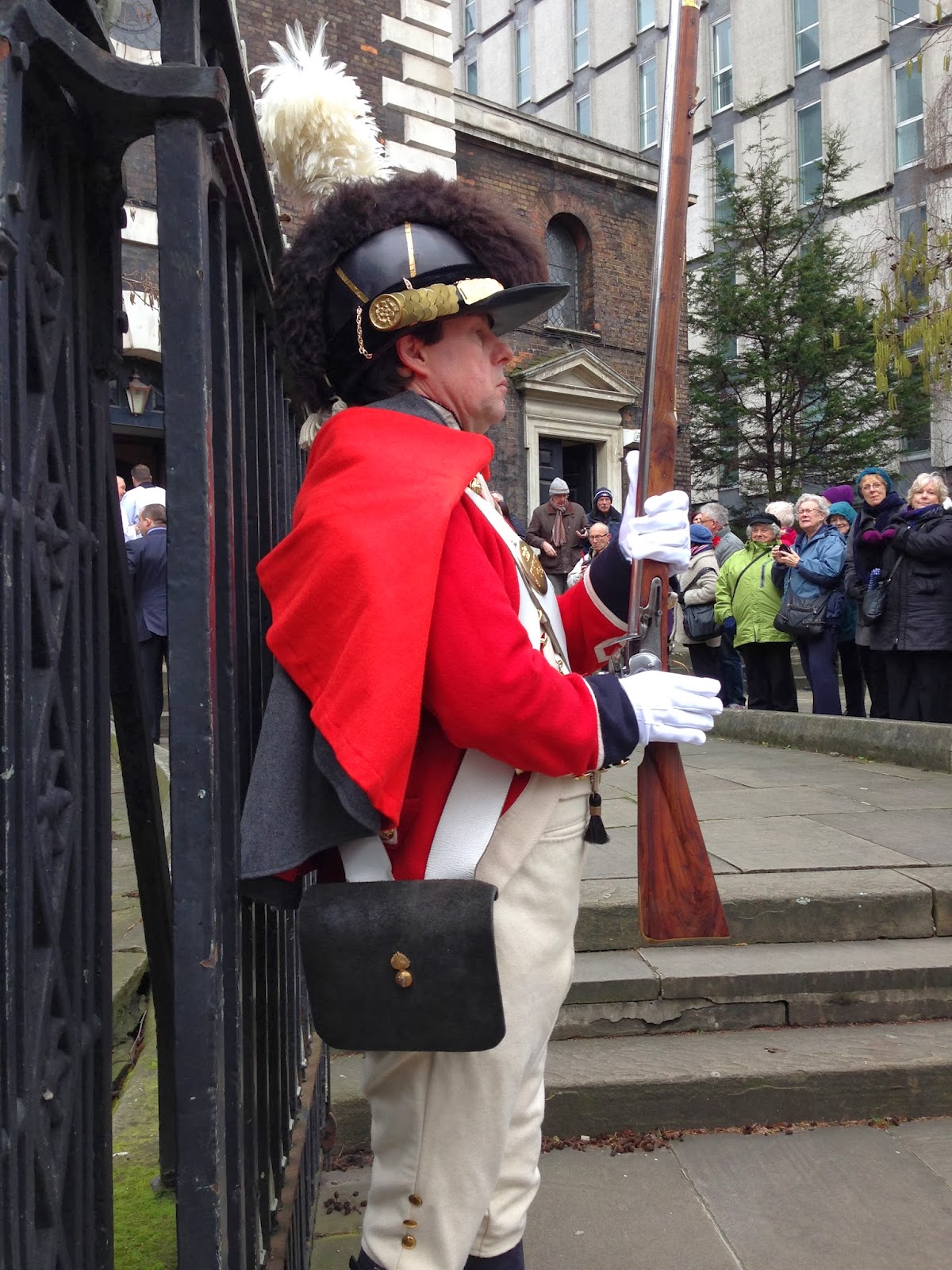 One wonders if I was mad  to go on a walk by the River Thames after a week of torrential rain? It proved to be a good decision, it was an early start, for a Sunday, but wrapped up warm, with the car and knowing where to park, plus glittering wintery sunshine, it was the right one!

Met up with fellow stalwarts in front of MI6 and we took the causeway down to the foreshore. A bit shady on the South side, but we headed for the sunny spots towards Battersea Power Station.

Not as slippy or muddy as expected, apparently due to the high rainfall the river was top heavy, fast moving and swept all before including the grungy stuff!

Our guide, Mike always entertaining, full of wonderful tales and extraordinarily knowledgeable about all manner of artefacts from flint to pottery and everything in between explained the site to us. We had a potter with us and there was some debate as to whether the London clay exposed might be worth giving a go in the kiln, an interesting experiment possible and we wait to hear about the results.

The prehistoric archaeological site we were seeking had been discovered through a mudlark's find in 1993. The famous Time Team got down there in 2005 to discover one of the largest Bronze Age structures in Britain.  You can watch it here in full http://www.channel4.com/programmes/time-team/4od#2927762.

When we arrived the tips were just visible but afer an hour you could see the posts quite clearly with their attendant archaeological stakes around them (to protect them and mark the spot).  The monument is situated at the confluence of the Thames and the ancient River Effra - a site of votive offerings, a bridge leading to nowhere, or perhaps to marshy islands, of which there were many in the unencumbered Thames of ancient times.

The Time Team inserted a post in 2005 to record the foreshore erosion and on our Sunday morning it was a foot above ground. This site is also providing evidence of the sea-level rise over the past 12,000 years.

Special thanks to Mike Webber who guided the walk, South Bank Mosaics who arranged it for us and friends and family who joined us.