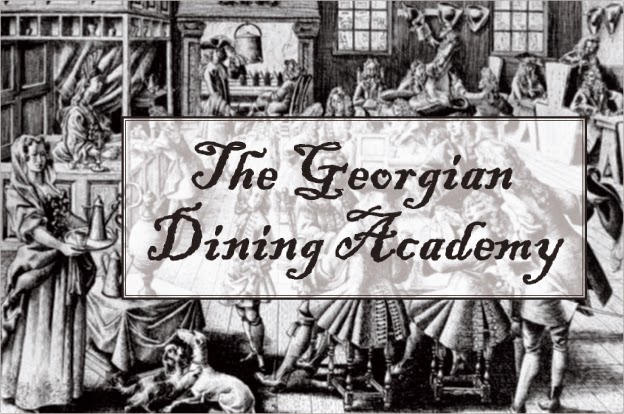 Miss Kitty Pridden and Miss B invite you to join them for a special evening of Georgian conviviality, hospitality and frivolity!  In the dark panelled booths and courtyard of Simpson's Tavern in Cornhill, City of London.

A candlelit evening of delicious food, sparkling wit, beguiling performances in an atmosphere full of the bonhomie of a 1757 establishment especially opened this night for our inaugural Georgian dining event.

You will come away having partaken of a hearty repast, served with punch, wine and port plus introductions to some of the wonderful characters of Georgian London and other special guests.

A Three Course Supper with drinks, and performance throughout included in the price! A bargain, ‘theatre’ and dining combined!
Dressing up for the occasion is encouraged but is not obligatory.
Discounted rates available for groups of 6 or more, please enquire at nouveaurococo@outlook.com
You will receive a menu choice will be sent to you 2 weeks prior to event. 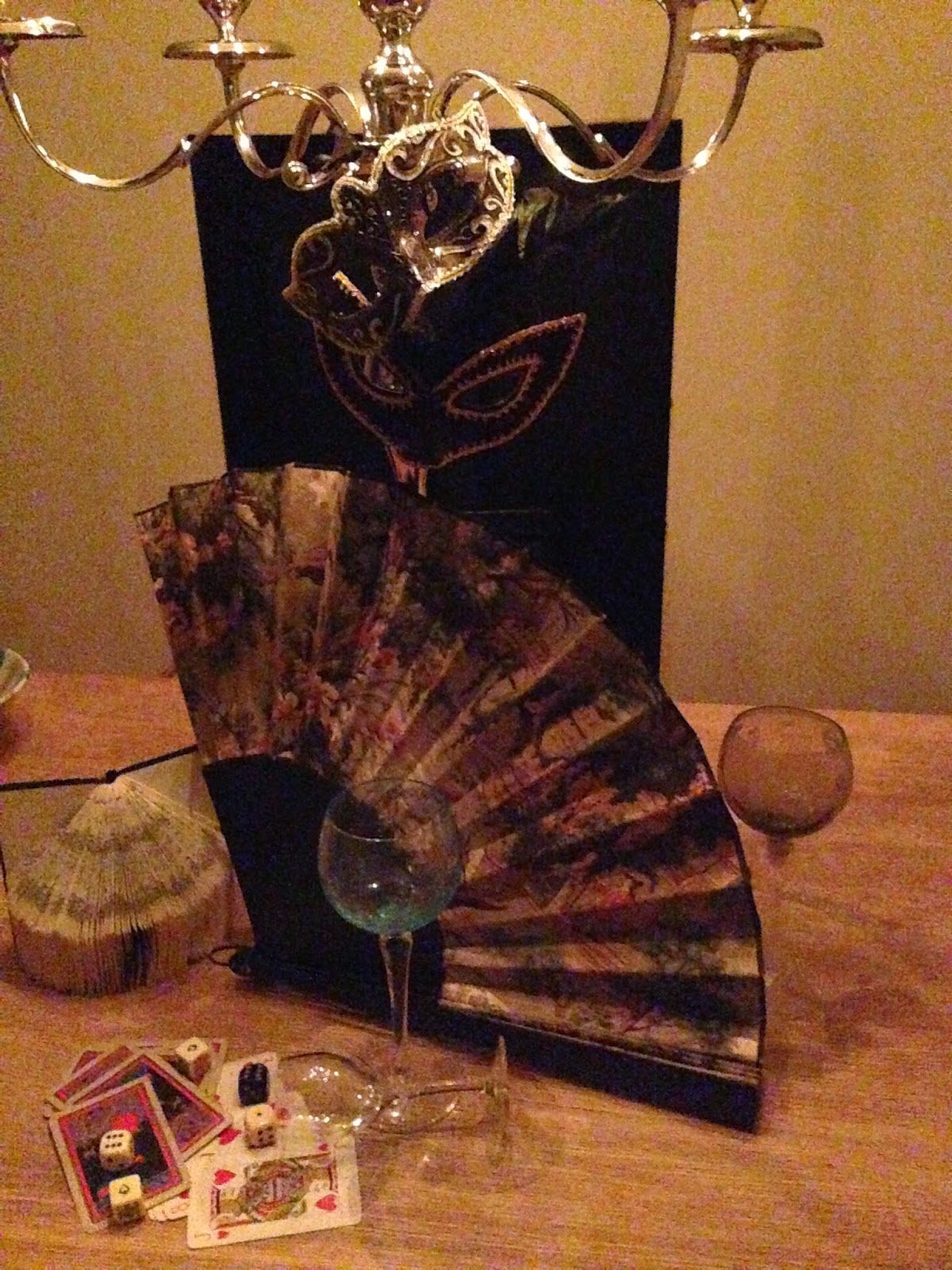 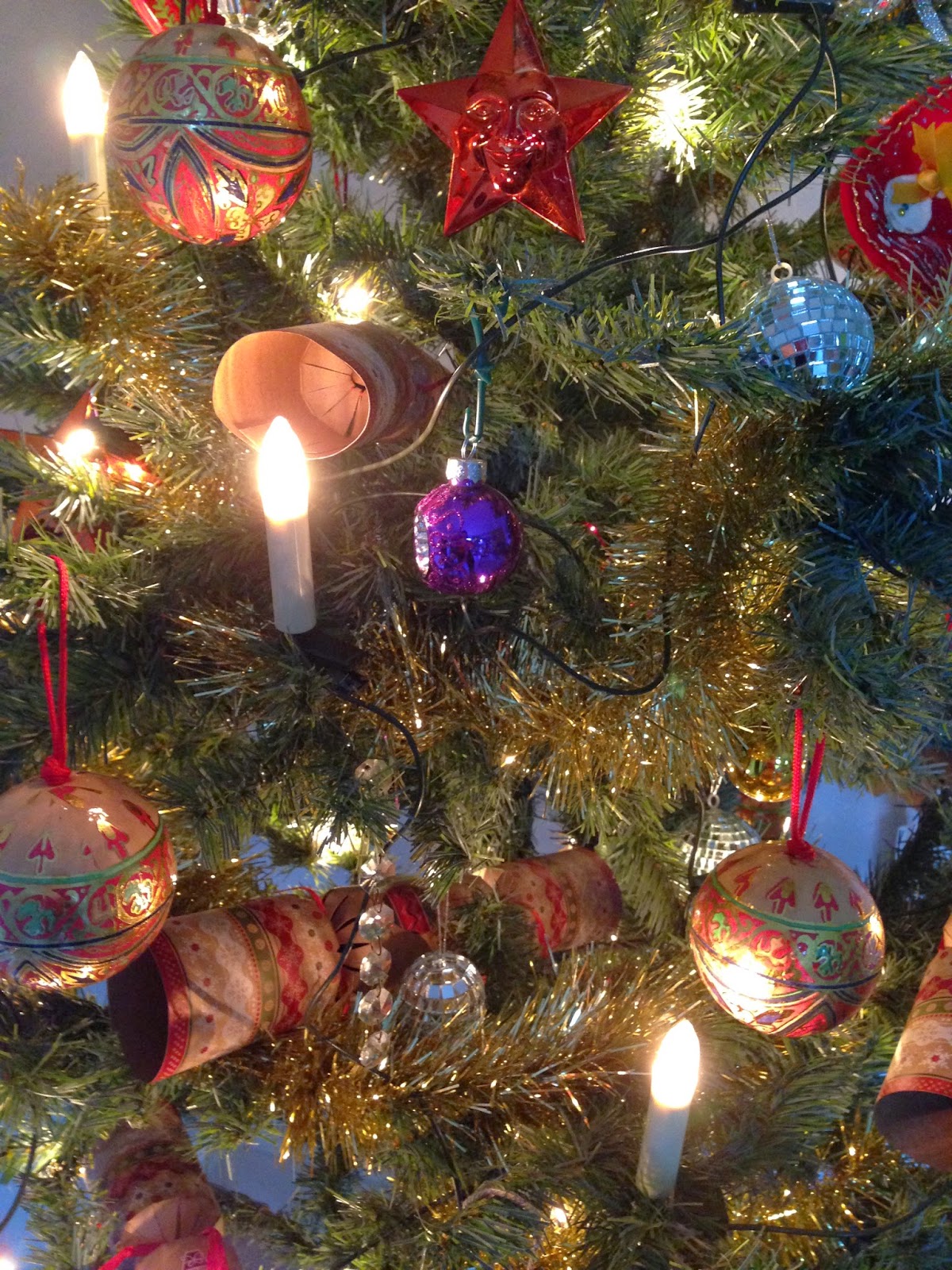 A quiet December by my standards, spent sorting our piles of paperwork, filing, plus working on rotas and dairy dates for 2015. Still not finished but it feels a little more organised.

Several Christmas drinks, dinners and a lovely Carol Service at St Magnus the Martyr in the presence of the Alan Yarrow, Lord Mayor of London, we belong to the same Ward Club don't you know!


My family is very small, so the two of us have a great time sharing the cooking and feasting at Christmas time. Venison Stew, Gressingham Duck, Belly Pork, a special Christmas Custard Tart with spices and fruit. I hasten to add these dishes were served up over several days.

An evening in front of the telly to watch Skyfall and Downton Abbey. Also a great afternoon spent with an elderly neighbour playing Cluedo. None of us had a clue I assure you, but we did laugh a lot!  Only regret is not going for that walk yesterday when it was so sunny.

I also booked to visit the Sky Garden at 20 Fenchurch Street on the 15th, so there will be plenty to blog about.


The next engagement is at the  Guildhall Library where the Photoset by Niki Gorick of the City of London Guides is on show until end of March. On 22nd January, the second tranche of City Guides will each take a turn to talk about their experiences guiding in the City, I am one of them and at the moment cannot think of anything to say, but when has that stopped me!

I have also been quite diligent with my guiding calendar and have made several offerings to Footprints of London, which you can find here, starting with T S Eliot - The Wasteland Walk on the 17th January.

February is a time of preparation for several private walks and a new ones. Also it is time for another Georgian Dining Academy event at Simpson's Tavern on 26th February. Bookings open
http://www.eventbrite.co.uk/e/the-georgian-dining-academy-simpsons-tavern-tickets-14923151548 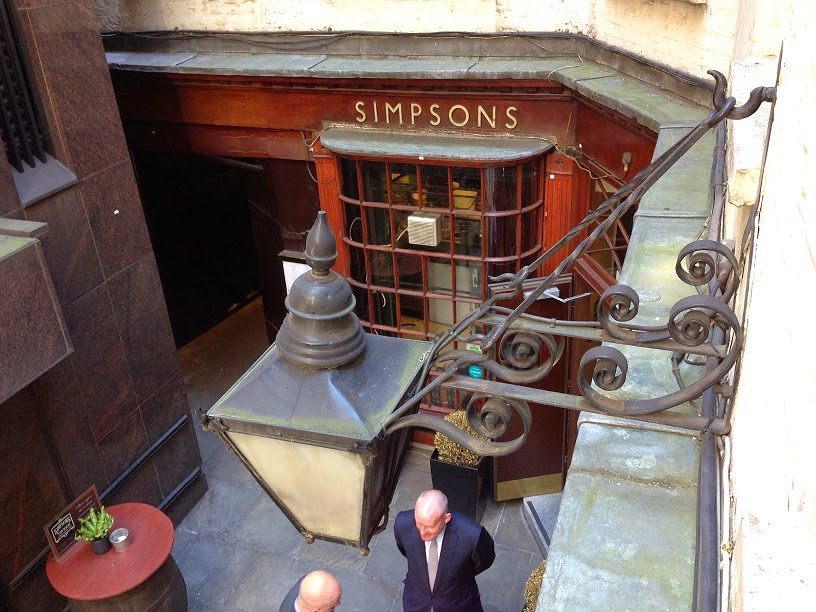 A new Women Through Time Walk is under construction and will take place around Fleet Street area, this will be ready in time for International Women's Day on 8th March the theme this year is 'Make It Happen'.


So that is all from me for now.  THANK YOU for your support and interest throughout 2014 and wish you all a PROSPEROUS & HAPPY 2015.

Queenhithe Mosaic - a stunning new installation in the City of London

“Mosaic is a metaphor for bringing together all the peoples, tribes, creeds, cultures, colours, clans, faiths and freedoms to make a brilliant whole.” David Tootill – Project Director, Southbank Mosaics

A volunteer experience bar none!

I have always loved the site of Europe’s oldest and only remaining Anglo Saxon dock from the very first moment I set eyes on it. All that sludge and muck, and ribbons of flotsam and jetsam with bright orange rope entwined about plastic stuff in all shapes and sizes, everything from odd shoes to traffic cones, a weird and complex ‘necklace’ of non-compostable detritus within the most ancient of docks. 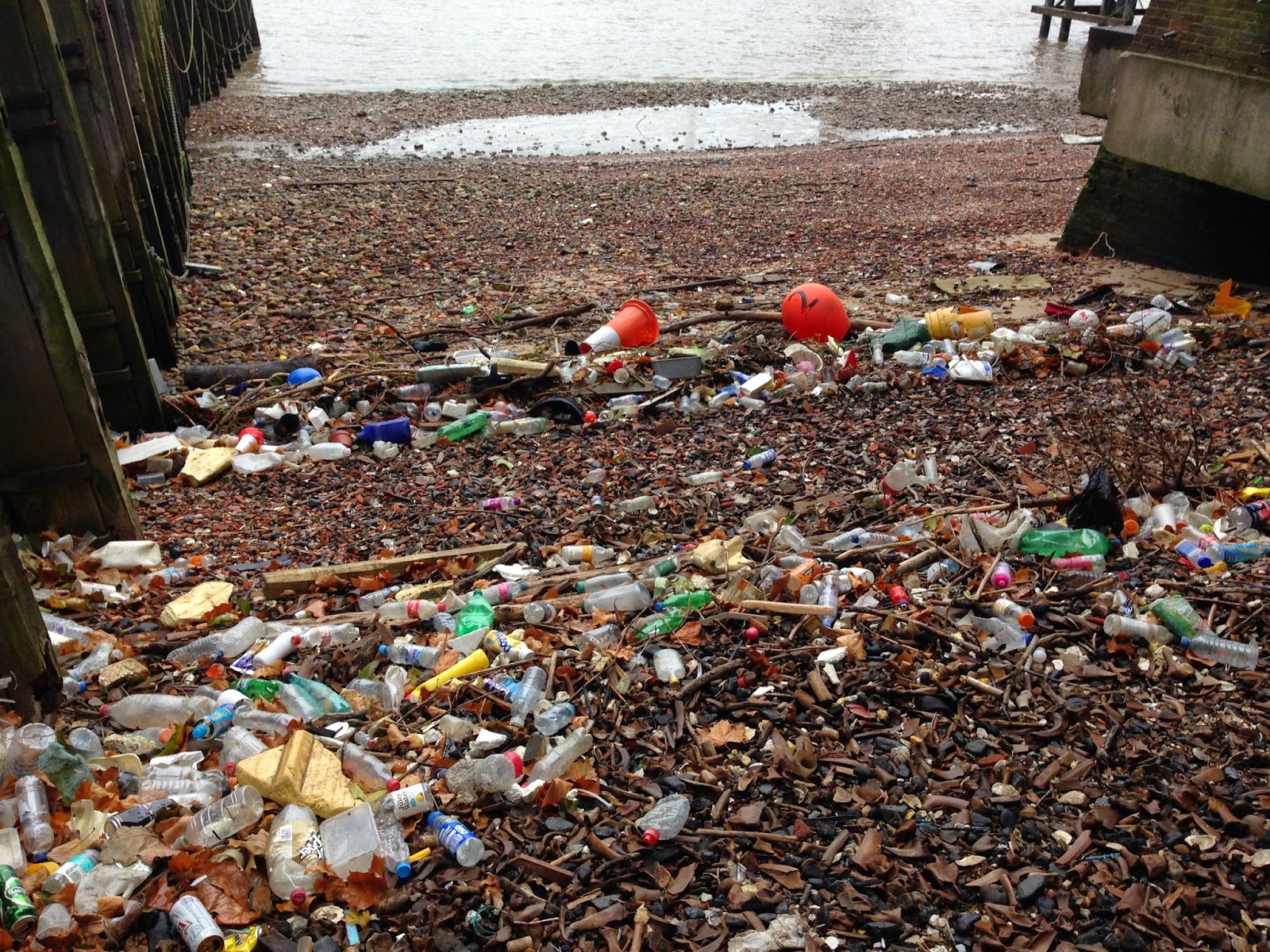 We cannot poke about in it, it’s a National Scheduled Monument since 1973 not only are the PLA authority on the lookout for renegade ‘mud larkers’ but even the public on the Thames Path shout at you if you so much as look like you might pick something up within its walls.

The importance of the place since time began is in its name ‘hythe’, a natural inlet, Dowgate and Billingsgate were the chosen gaps in the Roman wall for the very same reason. It seems Queenhithe was the most suitable to beach boats and then the creation of embankments, initially with brushwood and clay (London has a lot of clay). Old boats, broken up to strengthen it, rubbish of all kinds tipped in to build up the revetments created a harbour where at high tide ships could be tied up and goods landed there.

Corn arrived early on, thus the site being named Quern Hythe and later changed to Ethelred Hythe. Then passing to Henry I’s Queen Matilda to enjoy the customs and taxes from goods arriving at the port, hence its current name. When it finally silted up, in part due to the building of the stone London Bridge, this part of the Elizabethan port was sold to the City of London as the revenue was dramatically reduced. It worked on until the early 1970s.

Initially it was a secret who had commissioned the mosaic, all is now revealed. His initials can be found, on the hat being held aloft by a tiny figure at the end of the timeline – ‘GWH’ for Gordon Warwick Haines, the Alderman of Queenhithe Ward.  The project was paid for by the Heritage Lottery Fund, City of London and 4C Hotel Group.

Southbank Mosaics, who ran the project were based on the opposite bank from the City. Interestingly I was the only volunteer on the team who had any real knowledge of the Ward of Queenhithe and the history of the City of London. So I was invited to arrange a tour of the area to familiarise the rest of the group with the site. Mike Webber our archaeologist was also keen to gain some knowledge of the landside, so we could tie this in with the exploration of the foreshore which would come next. There were people involved who never set foot in the City, it was not essential, as their choice was to dedicate their talents to physically putting the design together, bit by tiny bit.


Consultant, Tessa Hunkin created the design with the Project Team of Jo Thorpe and David Tootill. It was discussed, researched and then checked through for the timeline in detail. Included were not only great moments in the history, but flora and fauna, as well as coin, coats of arms, animals, disasters, much else and, of course, people, the great and the ordinary.  We all had an area to research and develop and everyone was given an opportunity to state their case for elements to remain or to go, many an interesting debate ensued! Final decision down to the Project Director! 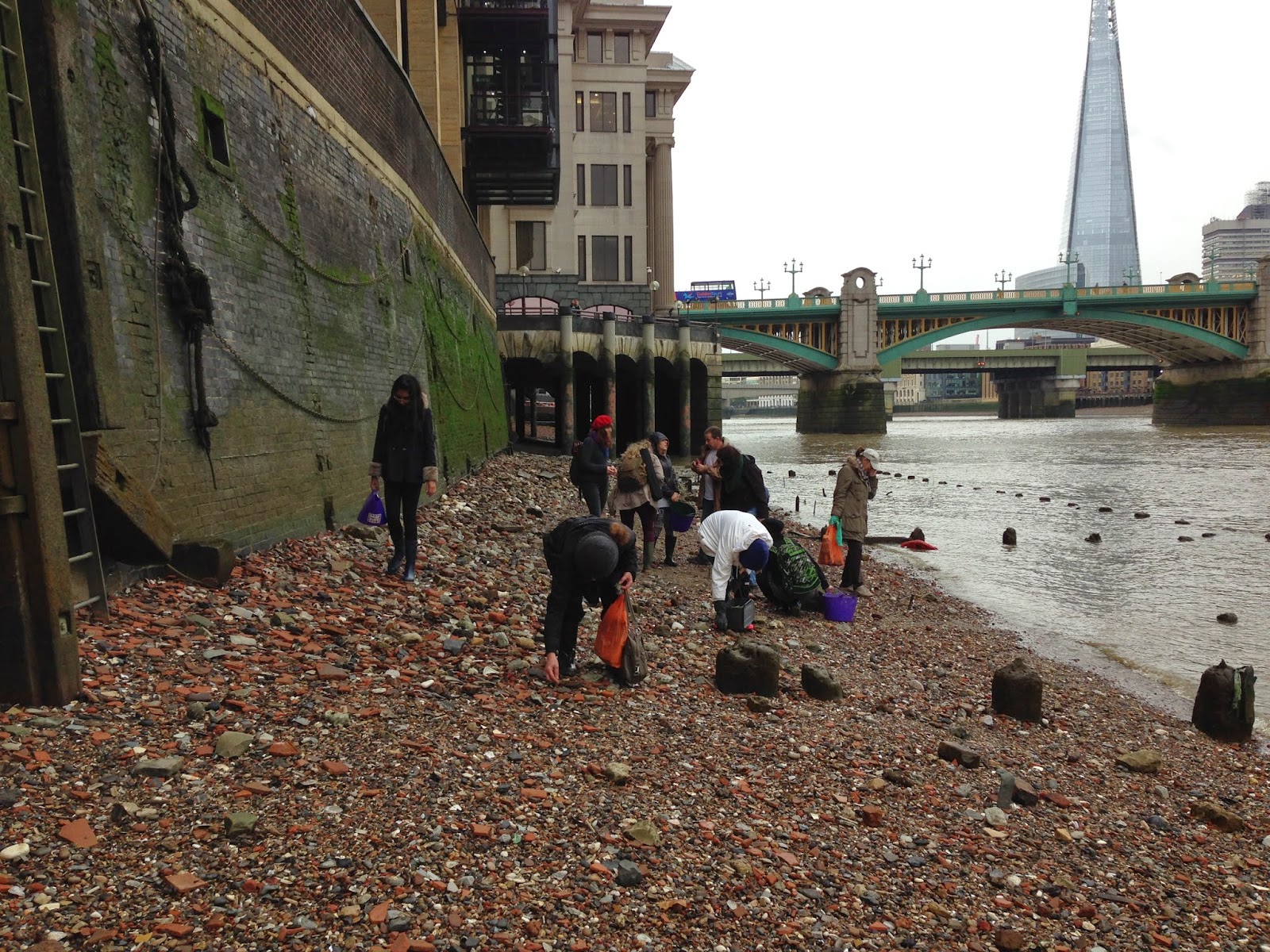 Meanwhile one thing that did not change was the ‘flow’ of the river within the design, so work began immediately on getting this started.  The style of the mosaic was to be in the Roman/Classical style. This dictated the use of a certain colour palette, using ceramic and glass tiles, but the visual impact would be more like the Bayeaux Tapestry, the stylised figures especially.

Also the whole mosaic is created in reverse (placing the front of the tile face down on the paper).  Another essential part of the work was sizing up the Tessa Hunkin design to actual size and this task was undertaken by Maria Palmieri. With her talented team, she also designed the beautiful ‘cameos’ of the great and good that stand out from the timeline, and much else. Maria’s other task was to supervise the volunteers working on the sections. The next stage was the lettering, a template was created to ensure everyone knew exactly how many tiles were used in ‘T’ or a ‘W’ etc. Plus there were colour codes to follow too.  I did some lettering and wish I had done more having achieved ‘UNITY’.


There are 164 themed sections to the whole, which is over 100 feet long and it was imperative they all join up exactly. The next stage were the ‘scenes’ of important events, which required great skill to achieve the fluidity of movement of the figures whilst creating backgrounds which allowed this to shine through. The work forged ahead on schedule.

Jon Newman led the history team who researched all the themes and he is also editing the book being written about the project. Meanwhile Paula Ligo organised a record of the whole process, using filmmakers. This included filming walks on land and foreshore, interviewing volunteers and photographing them. Also planning meet ups to discuss research for the book and preparing for publication.  Yes, by the end of it there will be a short film, a book and maybe a T-shirt?

The foreshore walks proved to be a great favourite. We were all looking for sherds (bits of pottery) and elements that would form the border of the mosaic, again following the timeline. Mike Webber’s enthusiasm and patience was endless and we brought him all manner of finds. Roman pottery, medieval bits and pieces, green glazed Tudor, parts of the dappled Bellamine ware, Delft platters, Victorian plates etc, oyster shells, clay pipes and so on.  All this was sorted and washed, then checked to find out whether it would actually survive being part of the mosaic. Thankfully the finds passed the test and are now mixed with modern ceramics tiles to form an ‘archaeological’ border to complement the timeline as it flows towards the C21st. There are also embedded QPR codes to get additional information. 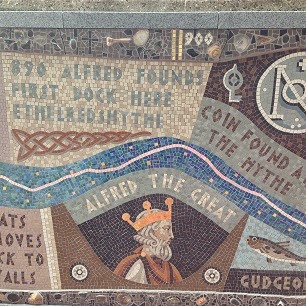 So the mosaic is complete, remember it has been created in reverse, so what we saw laid out in the hallway of South Bank Mosaics was not what would face the front. So the moment of truth was yet to come when the sections were mounted on the defence wall at Queenhithe. 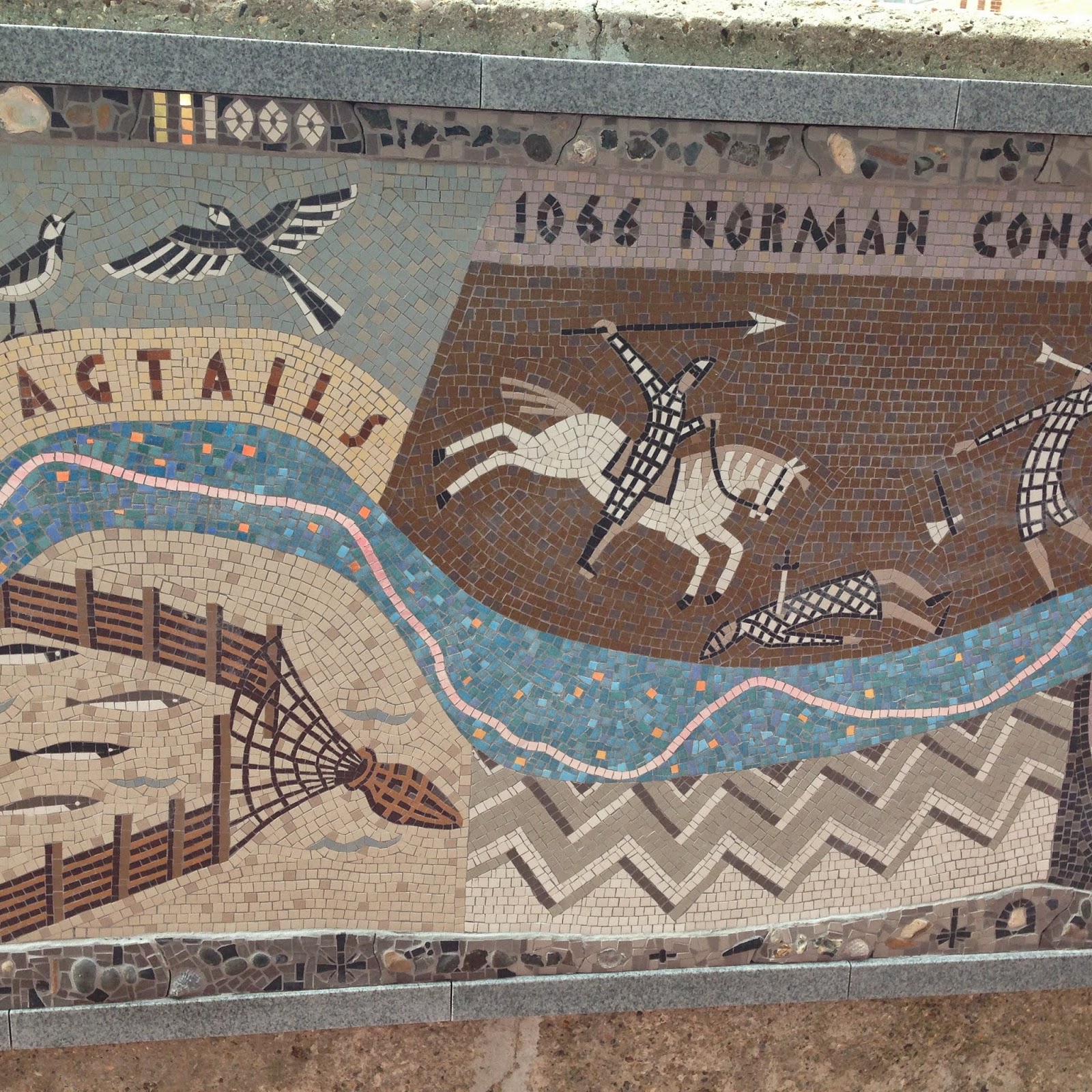 Walter Bernardin was commissioned to place the mosaic in situ and he works alone, acknowledged as the most skilled in work of this kind. I arrived on one of the days the panels were going up and I felt for everyone.  It was a very tense scene, particularly for Maria who had been involved in the scaling, designing, making and bringing to completion this great work. It looked incredible on that day and it was not even complete. Meanwhile the film was being made of the great moment. 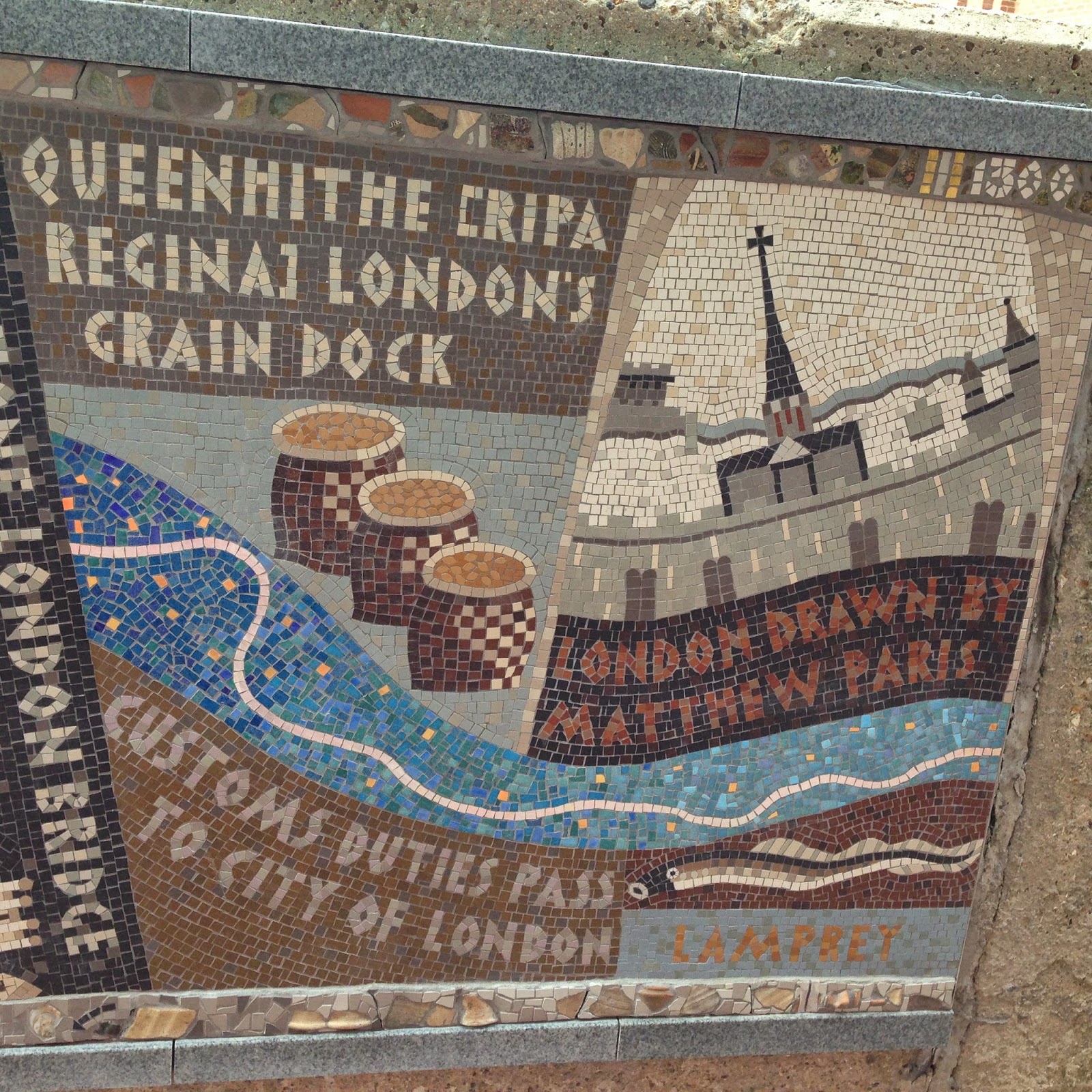 The mosaic was up for the Lord Mayor’s Show on 8th November and my guide colleagues, some who had seen the work going up, were in awe at its size and beauty and were delighted to be some of the first people to extol its merits on that special day.

Where to find the mosaic follow the Thames Path from Millenium Bridge towards London Bridge, behind Queens Quay building.