Michael Caine a Freeman - 'Now there's not many people that know that'.

Born Maurice Micklewhite in 1933, Sir Michael Caine CBE became a Freeman of the City of London on 8th March 2013.

Caine was born in Rotherhithe, Bermondsey, brought up South of the river, Southwark initially and after the war at Elephant & Castle living in a pre-fab bungalow which he considered the height of luxury. His father was a Fish Porter at Billingsgate.  His comment at being made a Freeman of the City of London was - (sic) “It had taken him a long time to get to the other side of the river, but he’d finally made it!”

He is delighted and surprised at being honoured by the City, the ceremony took place the day before his  birthday, at the Museum of London which is hosting an exhibition dedicated to him as the ‘Cockney Rebel’.  The special service usually takes place at the Guildhall, but instead took place at the museum in the galleries showing the exhibition of his life and times.

Sir Michael Caine has been given the Freedom of the City of London in recognition of his film career.

The veteran actor, famous for his trademark Cockney accent, turns 80 on March 14 and has been acting in films since the 1950s. Depending on how old you are you may remember him in The Italian Job (original version), Alfie and Zulu, a younger generation will recognise him from Batman series of films and Inception.  At the last count he has made 115 films up to an including 2013!

The Freedom of the City of London dates back to 1237. It originally referred to someone who had been given the right to trade or carry out their craft in London's Square Mile after an apprenticeship of seven years. However, it is now largely a symbolic gesture and anyone can be nominated, however I am sure we all agree Sir Michael has definitely served his ‘apprenticeship’ to acting and film.

The Museum of London exhibition runs from March 8 to July 14 and entry is free.

View here, Sir Michael swearing his oath to the City and the Queen.
.
http://news.sky.com/story/1062111/sir-michael-caine-given-city-of-london-freedom

As some of you already know MissB became a Freeman of the City on 5th March, her ceremony taking place in the presence of the Clerk of the Chamberlain’s Court at the Guildhall.

A version of this article appeared first in The Londoneer blog.

A City Walk - Women through time - their gender their strength 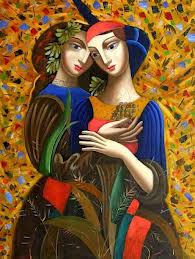 A City Walk - Women through time - their gender their strength

The women you will meet and get to know on this walk covers a period over 1500 years, some you will have heard of, but there are others you have not. From the infamous to the little known, the royal or poor, the bright and the beautiful, each and every one of these women have left their mark, not in a physical sense necessarily, no monument, for some not even a written word, but once met not forgotten.  Their stories re-emerge time and time again, ‘gaining momentum’ and are an example to all women of how, through time and history, their ‘gender’ is their strength!

Women Through Time - their gender their strength

This walk was launched yesterday and was commissioned by Jackie Groundsell of the 1230 The Women's Company to celebrate International Women's Day. www.1230.co.uk

I would also like to extend a special THANK YOU to Mikaela Ioannou - Studying photography at University of East London and her colleagues who used the walk as the subject of their documentary. All film, photographs and interviews will be available to view at their exhibition in April, details to follow.


This year’s theme  is ‘The Gender Agenda: Gaining Momentum', initially I thought this would be a difficult one to weave into a walk in the City. In my researches over the last year I have come across many incredible women who are connected to the City of London and what springs to mind is ‘the power within’, when a woman sets her mind to do something, there is nothing going to stop her!

The women you will meet and get to know on this walk covers a period over 1500 years, some you will have heard of, but there are others you have not. From the infamous to the little known, the queenly and the poor, the bright and the beautiful, each and every one of these women have left their mark, not in a physical sense necessarily, no monument, for some not even a written word, but once met not forgotten.  Their stories re-emerge time and time again, ‘gaining momentum’ and are an example to all women of how, through time and history, their ‘gender’ is their strength!

I welcome the opportunity of introducing and re-introducing these extraordinary ladies to you as this walk will now be available for booking.

£10 per person
Concessions available
Organisations please contact me by e-mail if you would like specific dates.
missbtakesawalk@gmail.com

The first performance for nearly 1900 years took place in the Roman Amphitheatre at the Guildhall Gallery last night. It was an exceptional moment.

What remains of the amphitheatre (AD120) is the eastern entrance with the stonework remains on the left (when facing the stage) of a possible animal enclosure and mirrored to the left an anteroom which is presumed to have housed a small temple, a place of contemplation and offerings before entering the arena to perform or die.

The audience is seated in the 'entrance' way with stacked rows at the back.  A colourful stage, Pompeian inspired, golden columns set off by blood red walls (appropriate as to what unfolds) in the semi circular area in front of the viewer.  As the programme states the audience is part of the play, you are participating either as a Roman Briton in the Londonium amphitheatre or an Athenian watching a Greek tragedy.

A classical performance in ancient ruins a perfect space. I have not studied the Classics or seen any of the plays performed so this was truly a first. This production has endeavoured to present the play as the author (Euripides) intended and has included the conventions of Greed tragedy to present something closer to the original first performed in 431 BC in Athens.

The masks and costumes are inspired by wall paintings, mosaics and vases. The whole cast wear masks,  I only have admiration for the actors (all male) who have to speak and sing through them. The masks are ugly and fascinating all at once, you cannot take your eyes off them. Ross McNamara as Medea is astonishing, it takes a few minutes to get used to the mask, the hair, but the body language as the play progresses is engrossing.

Traditionally there would have been fifteen men in the chorus but the confined space does not allow for this! However the chorus of four was sufficient and are the tool by which the playwright informs the audience on how they should react to his characters. Beautiful voices and you really sympathise with them when they realise there is no stopping Medea. There is a musical accompaniment which is haunting and emotive.

Thoroughly good night out and hope there will be more performances of Classical plays. Sadly there were quite a few empty seats, which is sad as I know there were people enquiring earlier in the day to buy tickets. If you want to see the performance and do not have a ticket get there for 7pm and see if there are 'no shows'.

Downside, there was a function going on somewhere in the building which could be heard through the wall, this was only for the first 20 minutes, but distracting. Also 'theatre' staff need to be quieter, perhaps with practise they will get used to their new role as 'ushers' in (of) classical drama.

Access to Temple Bar, famous arch originally in Fleet Street now situated by St Paul's will be open for viewing.

The excellent architectural raconteur David Thompson is once again walking the environs of St Paul's Cathedral and introducing us to other famous Christopher Wren churches around the City that were rebuilt after the Great Fire of 1666. Come and join us to hear the fascinating stories, see quirky details and chalky diagrams explaining construction. There may also be a special vist to a building not often accessed. Not to be missed!


Please just turn up or you can send an email to book a place.