Niki Gorick artist in resident at the Guildhall Library has just completed the new hang this week. 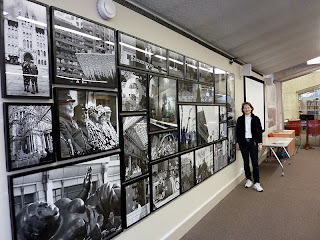 photos@nikigorick.com
On Wednesday 15th January 2014 at 2pm Miss B has been invited to discuss the photographs from a personal viewpoint, drawing on her rich knowledge of the Square Mile's history and pastimes.

The event is free but booking is essential via the library link above. 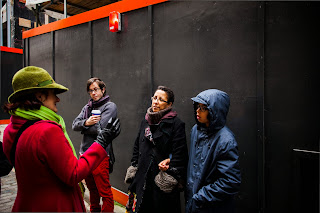 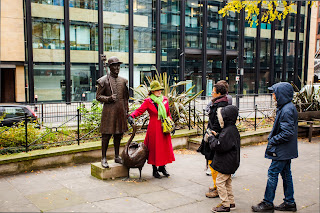 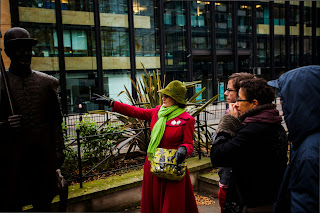 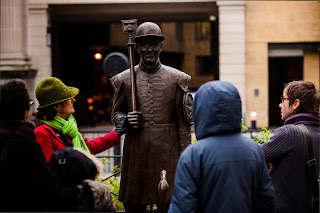 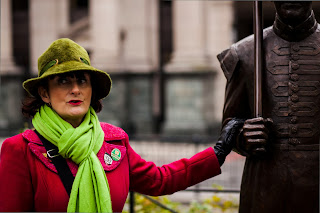 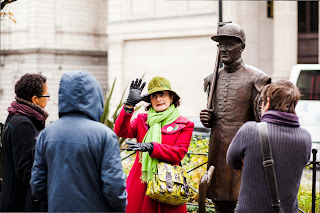 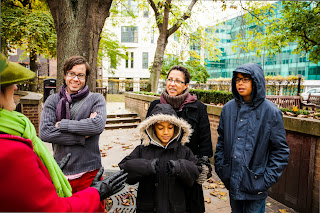 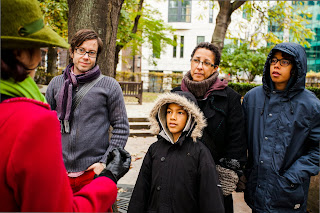 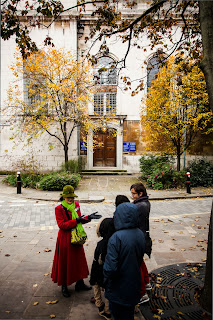 This walk is part of the South Bank Mosaic project to create the Queenhithe Timeline along the defence wall at the dock of the same name. Completion date to be announced in 2014.
Posted by MissB at 14:48 No comments:

The Ceremony of the Boar's Head


On the 4th December the Worshipful Company of Butchers delivered to the new Lord Mayor, Fiona Woolf, a boar’s head. An ancient ritual of thanks.

The butchers are recorded in the annals of history as early as 975AD, by 1540 they were granted a Coat of Arms.

The Master of the Company, Ian Kelly told us that the hall currently situated in Smithfield is their eighth, not through carelessness he hastens to add but because of cataclysmic events.  The original Hall in Smithfield was destroyed in the Great Fire in 1666, the Company moved to Pudding Lane where they remained from 1668 to 1884. That hall land was acquired by an Act of Parliament and they returned to Smithfield. Both World Wars saw extensive damage to the premises and the current building dates from 1960s, however, it houses many treasures and artefacts within from days gone by.

The Arms of The Company were granted in 1540, the motto being - 'Omnia Subjecisti Sub Pedibus, Oves et Boves'- Thou hast put all things under his feet, all Sheep and Oxen. The Charter of Incorporation was granted by James I in 1605.

The boar’s head was originally a gift to a past Lord Mayor who granted the butchers’ land near the Fleet River for butchering their cattle; as with many ceremonial elements of the City, this ‘gift’ continues today. Due to the ever present Health & Safety Regs the ‘real’ boar’s head is taken to the Mansion House earlier in the day and the paper machè version paraded through the streets.

The Master and his Court come out in all their finery, led by the Beadle and followed by family, friends and hangers on, including a jolly contingent of City of London Guides qualified and in training. It was lovely to parade down Cheapside with a police escort, by cycle, motorbike and horses to the rear, with the British Imperial Military Band to the fore playing a lively march.


The arrival at the Mansion House was greeted by a lovely smile from the Lord Mayor, who said ‘I heard you coming!’  Lots of photographs and then the party moved into the Mansion House; one lady asked me to go first, thinking I was invited, for a moment the idea to gate-crash something I would dearly love to experience crossed my mind, however, I declined and had a group photo with my fellow Guides instead.


More information about the Butchers' Company connections with Monarchy, Fishmongers & Poulterers as well as their charitable works can be found on their web site.


There are some great perks when you volunteer and even though I not yet a fully- fledged guide at 2 Willow Road (home of Erno Goldfinger) the National Trust guides and I went to visit a wonderful hidden house bordering Richmond Park.

Dorich House was the home of Dora Gordine and her husband Richard Hare. It was designed by Dora, an unusual feat for an artist in the 1930s, let alone a woman, but that will tell you much about what kind of person she was.

At the time considered an ‘exotic’ and mysterious character, playing up her ‘Russianness’ she was thought beyond Bohemian! Dora had been born in Latvia when it was still part of the Russian Empire, and ended up in Estonia. This talented and ambitious young woman arriving in Paris in the 1920s from Estonia, was very determined indeed. 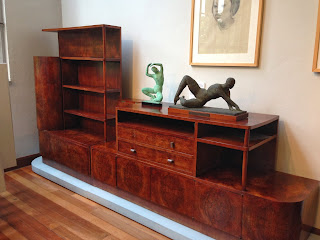 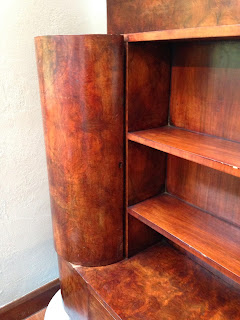 A tireless ‘networker’, long before the term was even invented, Dora Gordine managed to impress many, and in all professions, including such luminaries as Auguste Perret, Laurens van der Post, Noel Coward, Somerset Maugham. Also excellent at self-promotion without actually seeming to do so; her strong personality, looks and talent ensured she got her way.

Whilst in Paris she did not spend her time at the cafes and bars, Dora was there to work! Apparently “she found the louche and frenetic social life of Montparnasse artists an unacceptably frivolous distraction.” Interestingly Erno Goldfinger, architect to be, was also studying in Paris at the same time, if they had met, it is unlikely they would have got on.


She began as an artist and changed to sculptor and was noted by the mid 1930s ‘as possibly becoming the finest woman sculptor in the world’. Becoming a major presence in British sculpture, renowned for powerful and beautiful portrait heads, Dora Gordine and her husband resided at Dorich House for many years, it was Richard Hare’s sudden death in 1966 that put an end to her creative will.

I share with you some of my own photographs taken during our visit. Below is a virtual tour of the property and a link to an Estonian art page, which gives more detail of this woman’s fascinating career. Do visit the house if you can. The next open day is on 6th December 2013. Check website for details or telephone. Also best to book a place on the 11.30am or 2.30pm tour.
http://www.dorichhousemuseum.org.uk/opendays.php 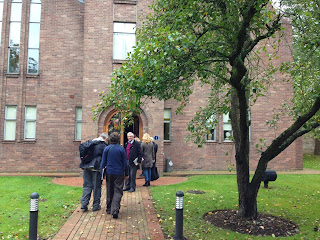