Ceremonies in the City 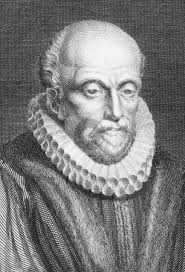 Footprints guides will be fully conversant with the 16th Century Survey of London compiled by John Stow, and well thumbed copies are probably on many bookshelves.

His descriptions and anecdotes are fascinating, as are the detailed account of the buildings, social conditions and customs of London in the 16th Century.

Historians, guides, anyone with any interest in the City of London owes John Stow a huge debt for the invaluable information he left behind and which is still incredibly useful more than 300 years after his death. With this in mind a service to commemorate his life and work is held every three years in the church of St Andrew Undershaft in St Mary Axe.

The service this year was held on 2nd April and was jointly sponsored by LAMAS (the London and Middlesex Archaeological Society) and the Merchant Taylors’ Company (Stow's own Livery company).


Following a reading by the John Price (Master of the Merchant Taylors’ Company) and a sermon by the Reverend William Taylor (Rector of St Helen’s Bishopsgate) the congregation moved to the Stowe monument on the north wall of the church to see Lord Mayor Fiona Woolf place a new quill pen in the hand of his effigy.

We were then privileged to hear Professor Caroline Barron (Emerita Professor of the History of London, Royal Holloway, University of London) ask and answer the question


“Why should we remember John Stow?”
Professor Barron talked about Stow’s early life and his work as a historian and the times he lived in – John Stow was a local boy, born in Cornhill, apprenticed to a tailor he joined the Worshipful Company of Merchant Taylors, married and later lived in Lime Street.  Born in 1525 he lived through the reigns of four Tudor monarchs and saw the reformation of the Church of England and the dissolution of the monasteries. He particularly mourned the disappearance of people’s identities when tombs and memorials were torn from churches.
Stow made it part of his life’s work to make note of as many names as possible as he conducted his survey of the City of London and make sure that Londoners, as well as the City itself, lived on between the pages of his book.
We have many reasons to be grateful to Stow – long may he be remembered.

An ancient ritual harking back to the dim and distant past when a former Lord Mayor gave the Butchers a piece of land near the Fleet River to slaughter their cattle and pigs.  Originally it would have been an actual boar's head presented, today it is paper mache.

Silent Ceremony - Swearing in of the new Lord Mayor

It is a very busy time for the City of London a new Lord Mayor is about to be elected and a series of ceremonies and celebrations commence from St Michaelmas Eve when the new Lord Mayor is chosen. This year it falls on 29th September. The admission of the Sheriffs occurs the day before.

The admission of the new Lord Mayor is known as the 'Silent Ceremony' when the outgoing Lord Mayor hands over his regalia of office to the newly elected person. This will be taking place on the 9th November, the day before the Lord Mayor's Show.

The new Lord Mayor is elected by the twenty five Alderman, it is usually common knowledge who will be the next Lord Mayor and also the one after that. It is the same for the Sheriffs, one an Alderman and the other non-Aldermanic.

Information correct at time of going to press.

Thereafter, a lady, Fiona Woolf will be Lord Mayor from 2013-2014. No she will not be Lady Mayoress! Not only will there be the usual pomp and circumstance to the proceedings, put some glamour too!

Ward Elections Of Common Councilmen fromPaul Taylor
On Thursday 19 July 2012 the Court of CommonCouncil passed an Act of Common Council changing the date for the ordinary Wardelections to take place in 2013 to Wednesday 20 March, with any poll being heldon Thursday 21 March 2013 and every fourth year after 2013 on the thirdWednesday of March.

From time immemorial there has existed and still exists in the City of London (the City) a Common Council consisting of the LordMayor, Aldermen and Commons in Common Council assembled and the Common Councilhave made, passed, ordained and established divers Acts, Ordinances , Rules, Orders and Regulations for the regulation and good government of the City andits Liberties as to them from time to time has been found necessary andexpedient.

"The ceremony of Swan Upping takes place during the third week of July every year. Swan Upping dates from the twelfth century, when The Crown claimed ownership of all mute swans which were considered an important food source for banquets and feasts. Today The Crown retains the right of ownership of all unmarked mute swans in open water, but The Queen mainly exercises this right on certain stretches of the River Thames and its surrounding tributaries. This ownership is shared with the Vintners' and Dyers' Livery Companies who were granted rights of ownership by The Crown in the fifteenth century. The swans are counted but are no longer eaten". Quoted from Pressrelease

The link above gives the various locations of the counting and marking of Swans.