MissB has been tinkering with her Blog, perhaps she should'nt have. Great sketch from Sydney R Jones though.


Firstly my apologies for the long neglect of my blog, there is so much going on with events and preparation for walks, there are just not enough hours in a day!

On Sunday I will be taking the 'City Sampler' walk from Paternoster Chop House, starting 11.30pm and ending back at the restaurant for lunch (optional).

Then off to the Guildhall Yard for 2.40pm when I hope to set off with a group to 'St Paul's and Paternoster Square' part of the contributions by the City of London Guides for the Open House weekend. The walk is free. There are many to choose from, so come along and take your pick, between dashing in and out of other buildings!

Also next week I have the pleasure of taking out a Company tour, in the evening, so it should prove interesting. Starting at Tooley Street, a little out of my area, but as soon as we are on London Bridge, I am back in City and in Bridge Ward Without! Again a taste of how the City has become what it is today, Romans, Trade, Civic Duty, Monarchy, Fires & Plague etc etc ...  We plan to end up at a lovely cosy pub by Cannon Street Station, The Banker which I think is actually under the railway bridge.

If you are out and about this weekend, why not seek out the London Stone? Do you know where it is?

An extract from my favourite book by S R Jones :
"Let's go along to London Stone". ... "Crossing Cannon Street, we came to Wren's church of St Swithin. There we saw London Stone sitting squat behind an iron grating in a cavity of the walling, where thoughtless pedestrians deposited omnibus tickets and cigarrette ends, and which millions of people passed as they hurried to and fro."

Already by Stow's (Medieval Chronicler) time St Swithin had become known  as 'by London Stone'. The stone originally stood in the road on the South Side of Cannon Street. It was, for its safety, removed and built into the the south wall of the church in 1798. It had always been believed that it was the remains of a Roman Milestone, but since it has been discovered that the Roman Governor's Palace stood near this site, and the stone is probably all that remains of it above ground. When it was decided not to rebuild St Swithins after WWII it was agreed that the London Stone must be incorporated into the new building on the site. What remains of the church at the rear of the Walbrook Building (Fosters) is now called St Swithin's Church Garden, an oasis of calm in the hurly burly of London life.

The London Stone is quietly waiting on Cannon Street for you to go seek it out. 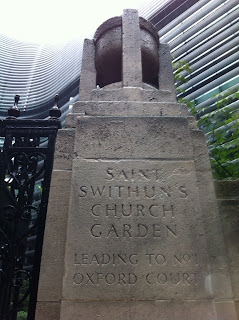