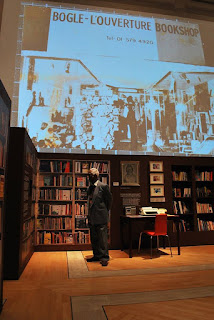 The City of London is not adverse to cultural diversity, paticularly regarding banks, people and food, and the new exhibition at the Guildhall Art Gallery really packs a punch, in words, film and the works on display, as the pamphlet states -  'is one of the most comprehensive surveys of Black British Art in recent years'.

The exhibition takes the form, in part, as a replica bookshop opened in Ealing in 1975, and re-named after Walter Rodney (a prominent Guyanese activist and scholar - assassinated in 1980).  The bookshop was the brainchild of Jessica and Eric Huntley, who founded Bogle-L'Overture Publications in 1969.


As policitical activists, involved in international activisim and campaigning, they published the works of black writers and artists, whilst also providing a space for 'political and creative engagement' where they 'could meet one another and interact in the community'.  At this time this was an enlightened and radical idea and not without its problems. This is dealt with in detail using the Huntley's business and personal papers, which are on loan from the London Metropolitan Archives. The audio visual is a real 'eye opener' as to what was going on in their neighbourhood, and other areas of London too.

Jessica Huntley was a prolific letter writer, and fundraiser (some are available to read at the exhibition) and international at that, considering a time without computers and the world wide web, one cannot help but wonder how much further her outreach would have extended if she had had the technology of today at her fingertips!


The Exhibition Team are also worth a mention:

Makeda Coaston Curator, Black British Art in Action (Friends of the Huntley Archive at LMA) and described as a change maker and senior cultural strategist with over 25 years' experience.

Katty Pearce, Curator, Black British Art in Action - works at the Guildhall Art Gallery and was very busy last year when she co-curated the rehang of the new permanent collection completed January 2015.

Also a special mention to Crescent Lodge, who created all the art work, props, signage for the exhibition, the banner above as you go in to the exhibition was hand painted to be in keeping with the way Jessica & Eric Huntley would have had it made, all hands to the cause.


We may also be getting used to having the famous Copley painting covered up to be used as a projection screen.  It is a great idea and creates an impact which ignites your interest the moment you arrive on the first level of the gallery. You will also see a couple of paintings from the No Colour Bar exhibition amongst the Victorian collection, they certainly create an impression!

The exhibition is Free and is on until 24th January 2016.

The Guildhall Art Gallery is open Monday to Sunday.