Where on earth has the time gone? Already Easter break and then it will be no time at all before we celebrate May Day.

With the best intentions it has been hard to keep up with the blog so I am going to bring you right up to date with a monthly review of what I have been up to starting from February.

February - bleak and cold after my sojourn in the Caribbean. But plenty to do.
Firstly an mini exhibition at the Museum of London about the finds linked to the Walbrook, one of the lost rivers of the City. Each discovery adds to the knowledge of the archaeology and the course of the river, which is technically not a river but a stream, but we will leave it at that for now! 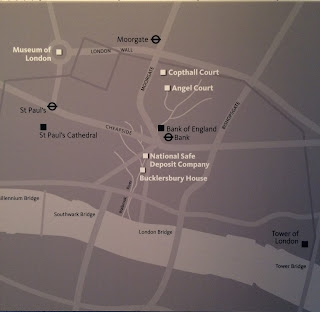 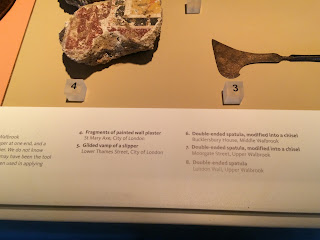 From this exhibition I decided revive my 'Walbrook Where Art Thou' tour which took place on 25th March with a great group of inquisitive and engaged folk. Weather was good and the City at the weekend is quiet. We started from the Museum of London so everyone could view the exhibits. The walk to the start point was interesting because there is a huge development at London Wall, a road that follows, yes, you guessed it, the line of the Roman Wall. I pointed out the ancient ruined church of Elsing 'spital and the reinstatement of the 'streets in the sky' aka pedways, but this time in cor-ten steel, to be festooned with green walls and new gardens below. Soon we will be able to walk from the MoL to Moorgate again above street level. 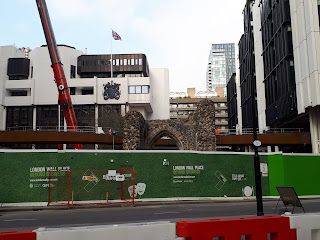 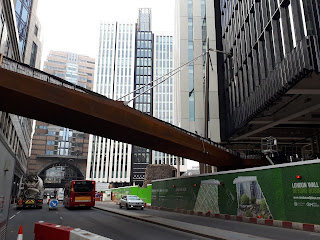 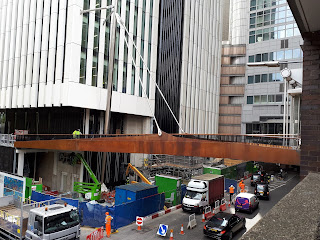 Also in March I was engaged to create a special birthday treat for a lady from her husband, the brief, history and architecture. So we began at St Paul's Underground and took in Christchurch Greyfriars, Postman's Park, West Smithfield and Charter House for the first segment. It was very cold and Storm Doris was gusting and blowing us about.  We took refuge in the new Charter House museum just opened, small and well presented, we also went to the chapel, just long enough to get warmed up before venturing out again. http://www.thecharterhouse.org/visit-us/

We walked through the City covering the financial heart, Bank of England, Royal Exchange, Mansion House, through alleyways to Leadenhall and finally to the 'Walkie Talkie at Fenchurch Street, where the couple had made a reservation for lunch in the Sky Garden.  'Doris' had become much stronger by then we had to hold on to bollards not to be blown into the on-coming traffic! All in a days work ...

February was also special for Georgian Dining Academy a Georgian events group I set up. We staged a glorious Valentine's Day late at the National Maritime Museum in Greenwich, it was many months in the planning and created to support the Emma Hamilton Exhibition (now ended).  Everyone had a fabulous time and we were thrilled at how well it all came together. You can see photographs and glean further information from the GDA web site.

Then into March, which  is also my birthday month and I was lucky enough to be invited to the City of London Distillery, where we had a delicious gin tasting and I treated myself to a bottle of Christopher Wren Gin, the bottle taking the shape of the dome of St Paul's. 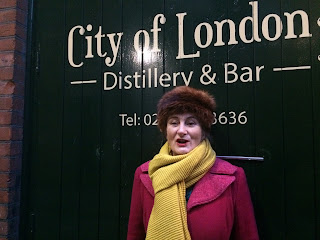 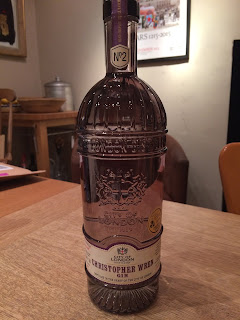 March was also the first of Georgian Dining Academy's Suppers at Simpson's Tavern off Cornhill, where we were liberally entertained with samples of, yes, more gin, this time Sacred Gin, distilled in a still in their home! Delicious and went down very well. 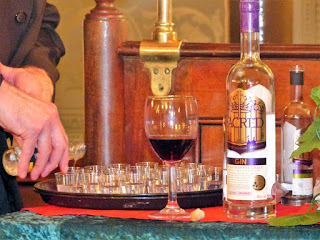 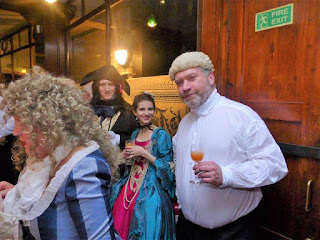 As a member of the T S Eliot Society I went to an evening of readings and music titled 'Decadence', actor Simon Callow was one of the readers at King's Place in Kings Cross. My first visit, but was not to be my last, as I soon discovered! A lovely evening and an excellent venue. The Waste Land Walk in the City goes from strength to strength and have planned several over the coming months. They are booked through Footprints of London. https://www.eventbrite.co.uk/e/t-s-eliot-the-waste-land-in-the-city-tickets-31925586288

I am also going to be doing the same walk for the London Festival of Architecture, 1st-30th June 2017, T S Eliot will take prominence but I will also elaborate on some of the old and new buildings we see on the tour. Details will be available on the LFA - walks will be listed shortly.

King's Place featured again this month when I was invited to join the team of Footprints of London Guides to create a walk around the 'Knowledge Quarter' the creative hub that King's Cross has become. Our team of four being trained to take many groups of students from Central America around the site over several days. It was an interesting few weeks of research looking at the site not so much from a historic viewpoint but as a regenerated hub and how the old and the new had been organised to make the most of this 67 acre site. As the walk was one already featured on Footprintscreated by Rob Smith, I will only repeat this walk for private groups. I will post separately to show the route with lots of pictures.

King's Place was one of our stops. This build was one of the earliest projects on the site, it was built in 2008 by Dixon Jones, for a music charity and also houses The Guardian newspaper and includes an art gallery. The first new build concert halls for many years in London and the enhances the site as an access to the arts.

My volunteering also kicks off in March when 2 Willow Road opens after its winter rest. You may have read my post on the Winter Clean 2016. always love going back to Erno Goldfinger's house and guiding people around. We will be open now until end of October this year.

So we are in April, which included a visit to the Handel & Hendrix Museum, two musical greats, worlds apart, but ended up choosing to live in the same street, and in adjoining houses! Handel also features big in my life this year. Working on a couple of cultural cruises on the river with Georgian Dining Academy 2016, one of my talks was about Handel's Water Music so with London Historians we have got together to create an event.

(Please note you are welcome to join London Historians, we are a good humoured and multi-faceted  knowledgeable bunch. If you do, please mention Miss B)

On 17th July 2017 it will 300 years since Handel composed and performed the Water Music for George I on the River Thames. Our group including support from Handel House and Amade Players are all aboard on that day to play this great piece of music live on a boat up and down the river. You can find details here on how to book. 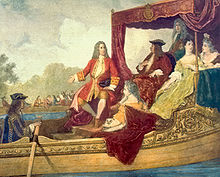 So this is at least some of the things I have been up to, there are a couple of separate posts, one about Kings Cross, plus I want to give an up date of some of the gardens I have been working on or photographing recently. Back soon!