It is good to be drawn out of your comfort zone. I was invited to be part of the Footprints of London team to walk students from Central America around the Kings Cross development site as an example of regeneration.

I had connections with this massive development site since 1980's when the property developers I worked for created the London Regeneration Consortium and architect Norman Foster created the first of many master plans for the site. The big bang came and went and the project bit the dust. Had it been built, it would of course already be out of date! So every cloud has a silver lining and with new building techniques and innovations the site is said to be  'future proof', it can adapt to growth and easily add future service requirements without much disruption to the existing.

Where do we start? Kings cross has a 'big' history if a rather shady recent past. The coming of the railways, an intrinsic part of the industrial Revolution, made this area north of London ideal for private companies to build termini and depots for the goods arriving to feed and power London and onward to supply the Empire. The pastures and small villages on what was the outskirts of London, were soon gobbled up by iron and steam.

The first station completed was Lewis Cubitt's Kings Cross in 1852 for the Great Northern Railway Company. A temporary station was built at the top end of the site to assist with crowds arriving for the Great Exhibition of 1851, this is now part of Waitrose and an Ice Cream Parlour. 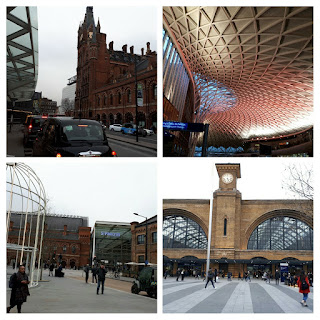 St Pancras Station built by George Gilbert Scott for the Midland Railway Company including the Gothic grand hotel built in 1868. A further hotel for the Great Northern Railways was added to cater for the many Victorians travelling in and out of London, journeys were long but getting through the metropolis was no easy task either, so comfortable accommodation was paramount.

By C20th the stations were still in use but the depots and goods yard were underused and the site had become an industrial wasteland. You did not linger in the area, taxi, tube or bus whisked you away, from an area rife with drugs and prostitution. So what changed?

In 1996 the Eurostar arrived at St Pancras and became the catalyst for change. The British Library moved from Bloomsbury next door to St Pancras Hotel (by now also abandoned). Something had to happen to breathe new life into the area.

2001 Argent were announced as the developer for the 67 acre site. They in turn formed a consortium with London & Continental Railways and DHL to form Kings Cross Central Partnership. The site was to become a business hub for the C21st and was dubbed 'The Knowledge Quarter'. This was possibly due to the arrival of the British Library in 1967 and the proximity of the Wellcome Institute as well as UCL. 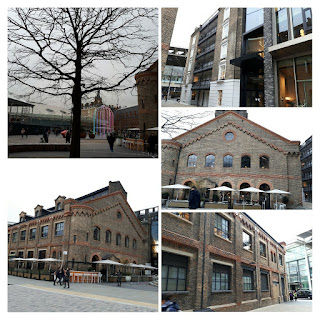 The clearing of the site of much of the industrial infrastructure was paramount to provide sufficient tracts of land to build new offices and accommodation. However much of the site required decontamination after years of coal fired fuel and gas being manufactured in the area. Therefore only suitable for business rather than residence in the heart of the development.

Also Grade II listed buildings pepper the site. The German Gymnasium a fine example of what migrating populations gave to the community in the past. Built by Germans in 1864 it was the first purpose built gym in England! It was the birthplace of the Olympics, then called the British National Olympics, the forerunner of the international Olympiad we enjoy today. Also encouraged and invited women to exercise in the hall.

Beautifully preserved, although truncated to the west, to allow for Eurostar, that end it has been recreated exactly as it was before and now houses a D&D Group restaurant serving, schnitzel, bratwurst and sauerkraut and other central European dishes. A perfect place for a meal at departure or upon arrival. Essential to have support businesses to the station and the offices. The gymnasium had closed down by 1908 and the society moved out of London. The fine oak tree in the piazza was given by Germany as a message of goodwill and celebration. 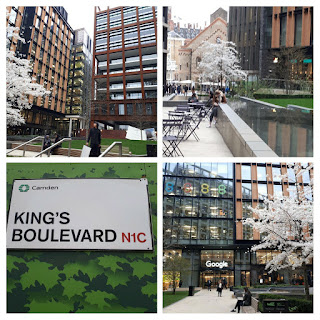 Beautifully landscaped square covers the site where the gas holders of the Pancras Gas Company. The current HQ of Google was a great favourite with the student and confirms the intention to create an area of knowledge, who better as an 'anchor' tenant than Google! They are planning a bigger HQ, supposedly as long as the Shard is high, with only 10 floors, (height limitations, to protect the views of St Paul's). This new building will face King's Boulevard. Do notice the new post code above.

The Cor-Ten steel building in the top left is by Eric Parry.

Do go and visit the Viewing Platform - at the top of the Boulevard. This long main street is usually full of pop up food stalls during lunch times, the platform is an ideal spot to view the size and layout of this new quarter, with great visuals to point out famous and infamous buildings of the skyline. 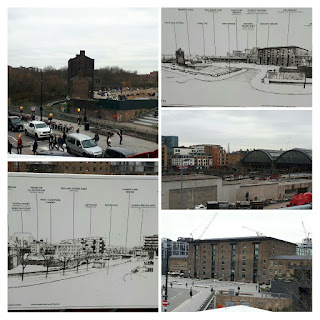 Another Grade II listed building on the site which proclaims the integrity and engineering skill of the Victorians, it is still standing strong. A Lewis Cubitt building and completed at the same time as the King Cross Station. An imaginative re-purposing of a major existing structure by architects Stanton Williams. It houses the University of Arts London, and is attached to the new Central St Martins. The architects have kept the grain shute and created an atrium, allowing light into what was the transit area. Ceiling heights are too low for offices so the upper levels have become the library for the University. 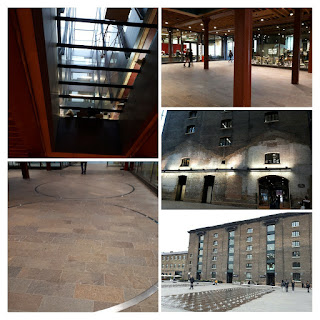 This was once the heart of the multi-modal transport system of Kings Cross, where the supply and distribution of food and power for London was controlled by rail, water and horsepower (the real thing). The building cleverly designed to take rail trucks, barges and haulage carts, all working as one big machine to distribute and unload goods arriving and departing.

Some of the industrial architecture rail tracks and turning tables have been integrated into the design. Where the canal basin once was is now represented with a fountain display that is reactive to light, on hot sunny days it goes higher on grey days it is lower but lulls us with its watery rhythm. Also there is apparently an app you can download whereby you can create a game with the water spouts called 'Snake'! 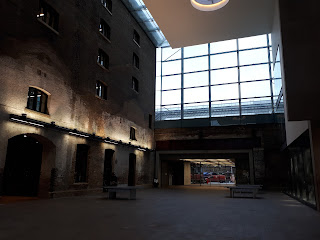 West Handy Side Canopy - heavily restored but re-created by the same company who installed it in 1888 to cover over the unloading of fish and perishables. Waitrose has been inserted into one part but the rest is left as a huge events or entertainment space. Workouts happen here, as well as London Fashion Week using it has a never ending cat walk. The studios of Central St Martins open on to it and you can see the young creatives at work. 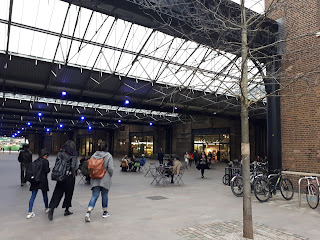 The Illustration Gallery, an idea made reality by Quentin Blake is also in a Victorian Building nearby, which also houses the HQ of the Art Fund.

Most of the green spaces, new squares and landscaping is by Dan Pearson.


Kings Place, the Knowledge Quarter has many business serviced by excellent restaurants and outlets, and it is not surprising there is also culture to hand. However Kings Place (Architect: Dixon Jones) was there before all the rest. A music charity had the foresight to build a concert hall (the first in London for 30 years) and create culture hub in 2008. It is also the HQ of The Guardian and includes an art gallery in part of a gas holder. So media, art, music and entertainment are also well covered at Kings Cross.


The Regents Canal flows through the site and of course the canal was there before the railways, although somewhat subsumed by them.  It now offers a delightful walk along its banks, plus of course barges are home to some 3,300 residents. Camley Street Nature Park are also nearby, in situ since 1984, reclaiming an abandoned coal drop, which has become a verdant urban oasis.

From the bridge over the canal you can also see the gas holders that had to be moved but could not be disposed of as also listed. The majority were dismantled and sent away for refurbishment and then returned to the north west of the site.  One is now a park and the others are made into high-end apartments. 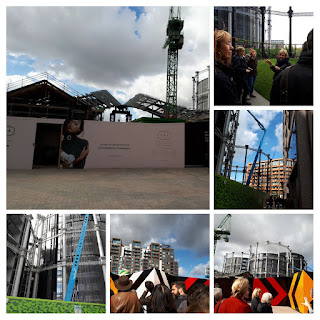 The last but one stop is the Francis Crick Institute - a hi-tech bio medical research centre. For the first time connecting researchers, different disciplines, academic institutions and healthcare organisations and businesses under one incredible roof.  The flagship for UK biomedical science. It is a pity I did not take a photograph of it nor the sculpture in front of it, but you will enjoy it all the more when you seek it out. An inspirational addition to the Knowledge Centre. A centre in memory of Alan Turing is coming next. 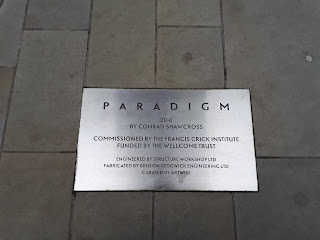 The final stop is the British Library, moved to the site in 1997, around the same time as the Eurostar. One of the catalysts for change in the area, a perfect location with the Wellcome Trust and UCL nearby. Holds 14 million books, collects all books published in the English language, many rare manuscripts. Also has a digital library that keeps a copy of UK websites, plus a business IP Centre, which can used for free. Plus much more.

I hope this has aroused your interest and you will want to explore the Quarter yourself or take a walk with us.

I would like to acknowledge and thank the original author of this walk Rob Smith for sharing this with us. Please check out  Footprints of London for Rob's regular walks. Miss B will only be doing this walk on special request.