Horatio Nelson was stationed at Nevis in the Caribbean in 1785. Here he met and later married Fanny Nesbit (1787).

During 1786 Nelson moved to Barbados where he was engaged in legal struggles with the Prize Courts.

[In 1784 he received command of the frigate HMS Boreas with the assignment to enforce the Navigation Acts in the vicinity of Antigua.[52]The Acts were unpopular with both the Americans and the colonies.[53] Nelson served on the station under Admiral Sir Richard Hughes, and often came into conflict with his superior officer over their differing interpretation of the Acts.[54] The captains of the American vessels Nelson had seized sued him for illegal seizure. Because the merchants of the nearby island of Nevis supported the American claim, Nelson was in peril of imprisonment; he remained sequestered on Boreas for eight months, until the courts ruled in his favour.[55] Wikipedia

Nelson and his new wife, Frances Nisbet, left the Caribbean to live in England shortly afterwards.

A devoted and loving wife she nursed him through his convalescence after he lost his arm at the Battle of Santa Cruz de Tenerife. He returned to active duty in 1798 and met Emma Hamilton, the rest is history. 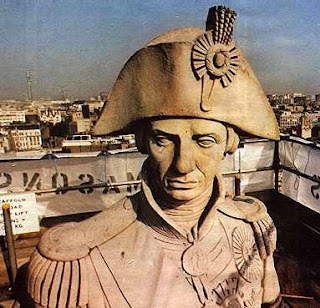 At the top of Nelson's Column
Trafalgar Square, London