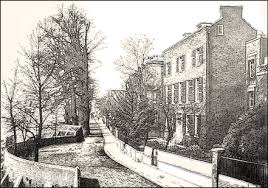 The grade II* listed building stands at the eastern end of Upper Mall on the north bank of the river Thames.  A fine example of Georgian architecture and dates from the late 1780s.

The house has been home to several notables:
·         Colonel Ralph Winwood  - the first occupant from 1790. Thereafter James Smith then,
·         Sir Francis Ronalds c1816
-          Constructed the first electric telegraph – above and underground. The latter entailing 525 feet of trench – insulated cable still being dug up as we speak. He has a memorial tablet on the Coach House.
·         George MacDonald 1867-1877 – The house known as ‘The Retreat’
-          A poet and a novelist. A large family of eleven children, to accommodate all had to rent a small adjoining house. MacDonald wrote two of his most famous books at Hammersmith, The Princess and the Goblin and At the Back of the North Wind.

William Morris - 1878-1896 http://en.wikipedia.org/wiki/William_Morris
The house was brought to the attention of William Morris by Dante Gabriel Rossetti who was house-hunting in the area. Rossetti did not like it but Morris found it to be ideal, but had to persuade Jane Morris, who wished to live nearer London. The carrot before the horse (excuse the pun), was to suggest the purchase of a pony-and-trap to ensure easy travel between Hammersmith and London. It worked! The house was renamed in order to link it with their home in Oxfordshire, Kelmscott Manor, interestingly, also situated close to the Thames, hence Morris thought a good idea to share the name.

After Morris’s death, Jane remained at the house until 1897 then moved back to Kelmscott Manor, taking most of the contents with her.  Some of the pieces were subsequently returned via bequest by May Morris.
There were several interesting inhabitants and you can catch up with them in the beautifully written A History of Kelmscott House by Helen Elletson (Curator).  It gives much detail about the owners and structural and interior changes over time. Plus the interesting groups they entertained over the years.

It is due to Mrs Marion Stephenson, one of the last residents, who remained in occupation of the house until her death in 1972. She bequeathed the house to the William Morris Society in 1970. 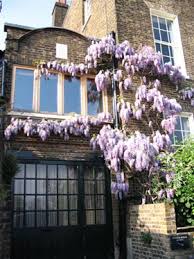 Sadly we cannot visit the rooms of the main house as these are occupied as private apartments, a means to preserve the property intact. However the Coach House and the basement have been converted into a delightful showplace which includes a printing press! Well worth a visit, also you can include the Emry Walker house in the same trip.

Open Thursday and Saturday 2.00-5.00pm, admission free.
Special Group Tours are encouraged and will include access to artefacts in the collection, with a fine speaker to talk you through the Morris’s time at Kelmscott House. Tel: 020 8741 3735
http://www.artfund.org/what-to-see/museums-and-galleries/kelmscott-house

Recommend lunch at The Dove pub just across the way. http://dovehammersmith.co.uk/