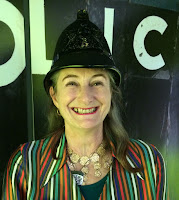 Have you heard of the ‘The Houndsditch Murders’? Claimed the lives of three City of London Police officers and remains to this day the largest loss of life in one incident on duty in the UK! Check out the model of the building where the murders took place which was used at the trial. Plus a 3D animation of the original automatic Mauser pistols – a lethal weapon!

So where can you find all this and more? Make your way to the new City’s Police Museum housed in the Guildhall Library which opened on 7th November.

It is a small space, but like Dr Who's tardis, once entered it seems much bigger! Brilliantly designed and decorated with excellent graphics, large bright show cases, 3D elements and all on a tight budget.  The Heritage Lottery Fund awarded a grant of £90,000 towards the development of the museum and associated community engagement. Success of the project is not only down to the team of staff and volunteers at City of London Police and the Guildhall Library, but working in partnership with Guildhall School of Music & Drama, and the City of London Corporation (who owns the school). Plus the City Guides who helped promote the Police Open Day and who we hope will play an important role in encouraging visitors to go to the Museum.

The Museum also offers tours to schools, so do check the web site for further details of tours, plus walks and talks.

My admiration is of course biased as I am a City Guide and very proud of the City and all those mentioned above to create from a large, dare I say, disorganised, collection of historical records and many macabre artefacts, this very modern and elegant little museum.  I was like a kid in a sweet shop when I was invited to the private view.  My photographs only give a taster, you must visit to really appreciate why I am so excited about it. 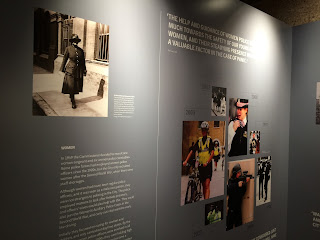 Not to give too much away, I am only offering headlines here of what you will find:

The Hounditch Murders – as mentioned above

The recruitment of women into the force

The Two World Wars and their impact on policing 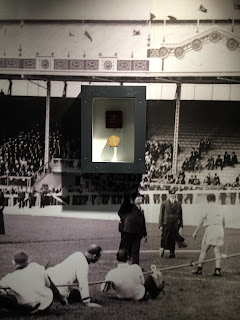 Terrorism – from the home-made bombs by the suffragettes on display

There is something of interest for everyone and hands on too!

“We are a unique force and everyone who works here is incredibly proud to serve the City. This museum illustrates much of what makes us special, our partnerships, our close links to our communities and most significantly, a long history that entwines us with the Square Mile and London.” Sara Pink, Head of the City of London Corporation’s Guildhall Library and City Business Library, said: “The museum will certainly attract a wide range of visitors, including City workers, residents, tourists and crime historians. From the horrors of Jack the Ripper’s murders in Whitechapel to how all of us must be extra-vigilant about identity fraud and terrorism, the exhibits will bring the personal stories and issues alive.”

The Commissioner mentioned 'Z Cars' in his speech at the Private View, and those of who remember the TV series can no doubt still hum the theme tune.  Just in case you have forgotten here is a You Tube link:https://www.youtube.com/watch?v=rWflrCrwUSw .

“The museum will certainly attract a wide range of visitors, including City workers, residents, tourists and crime historians. From the horrors of Jack the Ripper’s murders in Whitechapel to how all of us must be extra-vigilant about identity fraud and terrorism, the exhibits will bring the personal stories and issues alive.” 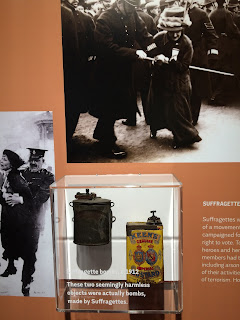 Admission is FREE
Details of opening times can be found here: 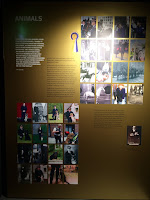 For those of my readers who are not City local, the information below explains something of the workings and connections of and with the City of London:

About the City of London Corporation:
The City of London Corporation is a uniquely diverse organisation. It supports and promotes the City as a world leader in international finance and business services and provides local services and policing for those working in, living in, and visiting the Square Mile. It also provides valued services to London and the nation. These include the Barbican Centre, Barbican Music Library, Guildhall School of Music & Drama, Guildhall Library, Guildhall Art Gallery and Roman Amphitheatre, London Metropolitan Archives, a range of education provision (including three City Academies); five Thames bridges (including Tower Bridge and Millennium Bridge), Central Criminal Court at Old Bailey, over 10,000 acres of open spaces (including Hampstead Heath and Epping Forest), and three wholesale food markets. The City of London Corporation is London’s Port Health Authority and also runs the Animal Reception Centre at Heathrow. For more details, visit www.cityoflondon.gov.uk

About the City of London Police:
The City of London Police is responsible for policing the City’s business district, the ‘Square Mile’ in the historical centre of London.  In addition, it holds national responsibility for Economic Crime and under this remit is host to Action Fraud (the national fraud and cybercrime reporting service), the National Fraud Intelligence Bureau, the Insurance Fraud Enforcement Department and the Police Intellectual Property Crime Unit. The City of London continues to be one of the safest urban areas in the country.

About the Guildhall School of Music & Drama
The Guildhall School is a vibrant, international community of young musicians, actors and theatre technicians in the heart of the City of London. Twice-rated No.1 specialist institution in the UK by the Guardian University Guide, and recently selected as one of the top ten institutions for performing arts in the world (QS World University Rankings 2016), the School is a global leader of creative and professional practice which promotes innovation, experiment and research, with over 900 students in higher education, drawn from nearly 60 countries around the world. It is also the UK’s leading provider of specialist music training at the under-18 level with nearly 2,500 students in Junior Guildhall and Centre for Young Musicians. The School is widely recognised for the quality of its teaching and its graduates, and its new building, Milton Court which opened in September 2013, offers state-of-the-art facilities to match the talent within its walls, ensuring that students enter their chosen profession at the highest level. Milton Court is part of the unique Guildhall School/Barbican partnership delivering world-class arts and learning.
www.gsmd.ac.uk

About the Heritage Lottery Fund:
Thanks to National Lottery players, we invest money to help people across the UK explore, enjoy and protect the heritage they care about - from the archaeology under our feet to the historic parks and buildings that we love, from precious memories and collections to rare wildlife. www.hlf.org.uk @heritagelottery