The Queen's House - ‘jewel in the crown’

of the Museum and the Maritime Greenwich World Heritage Site. 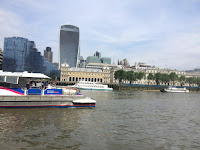 A chilly but sunny day brought me by MBNA Clipper to Greenwich, how else would you travel except by boat to the famous naval college and museum? However, my appointment was with the London Historians team to visit the recently opened Queen’s House.

The Inigo Jones designed house was the first great classical building of its kind and the last part of what was the great Tudor Palace of Greenwich as created by Henry VIII on a site of a Palace built by his father Henry VII. It was also the home of his son and then his daughter, Elizabeth I.

The manor of Greenwich was gifted by James I to his Danish queen, Anne, apparently as an apology for losing his temper after she accidentally shot one of his hunting dogs whilst on the hunt. It was Queen Anne who employed Inigo Jones to design and build what was initially a house within garden retreat. The front is in fact the back and the views from here look across the park up the hill, where the Observatory is now. Interestingly, the Greenwich to Woolwich Road ran behind (the front of the house) and in fact the later additions, the colonnades follow the line of the then road.  Queen Anne never saw the house completed this was left to the wife of Charles I, Queen Henrietta Marie.  When it was finished in 1638, it became her building of choice for her Court. 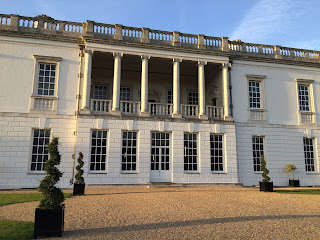 There is a book on sale at the National Maritime Museum (just next door for those not in the know) at a reduced price called The Queen’s House Greenwich’ by Pieter van der Merwe, who was our guide on my first visit. The book is gem and a bargain! 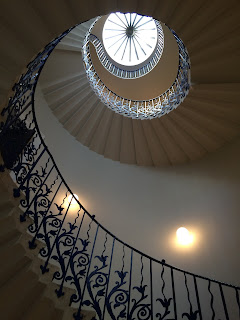 Into the Queen’s House we go via a door in what were the foundation vaults with no access to the piano mobile.  A mound of soil would have been banked up against it and grassed over. A plain set of steps up one level brought us to the Tulip Stairs, apparently one of the most photographed stairwells in the country if not the world! From the book - ‘This is the earliest centrally unsupported spiral stair in England, on the Italian Renaissance model’. It was designed as a descending flight so one might make a grand entrance in to the Hall.  A point of interest are the flowers in the design are which are lilies, the royal flower of France and incorporated as a compliment to Henrietta Maria. So why ‘tulips’? The wrought-iron rail design was first called this in an account for a smith’s repairs in 1694, he was probably unaware of their significance. 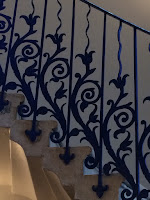 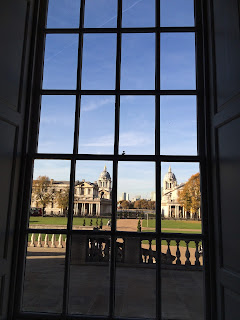 The Hall is ‘nominally a 40-foot cube but not precisely’ due to construction adjustment, but beautiful it is. A bright room with a floor of Italian marble, with a wooden gallery, which still shows some of Jones’s original paint scheme of white and gold. What is also golden is the detail on the walls and ceiling, one might think it is a schematic from an earlier period but in fact it is a contemporary design, by the Turner Prize winner, Richard Wright.  I viewed the gold-leaf fresco for the first time with the sun pouring in through the tall windows, on closer inspection on the gallery and looking up you begin to see the patterns forming, a perspective appearing and then reforming again. The gilt flowers, inspired by the tulips, or lilies of the staircase are mesmerizing. 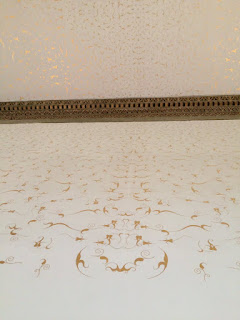 On my second visit on a grey cold day, found them even more fascinating as I could see even more iridescent shimmer in the pattern. A lovely inspired addition after some 400 years. 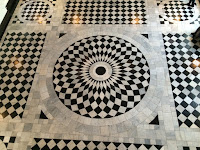 The Queen’s House has more rooms than you would imagine, extravagant ceiling painting, art by many a great master, including a Lowry, many dead Admirals, not surprising really. A family-tree of Tudors all in a row. As well as the Armada Portrait which has recently been saved for the Nation by the Nation! 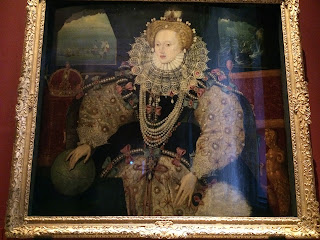 I have been twice and plan to go again as each time I see something new, and can revisit my favourite areas. There are also several anterooms which showcase the wide-ranging objects and painting subjects in the huge collection of the Royal Museums Greenwich.

The drawings of plants and flowers from the brave botanists who sailed with Captain Cook, You will find Emma Hamilton and Lord Nelsondisplayed with a bust of their daughter Horatia. The position shows how like her father she was.


Display of instruments to guide the seafarers and landlubbers, such as the Astrolabe (a blog to follow).  Last but not least, the room with the drawings of Indigo Jones, particularly the sketch for a ceiling painting, the perspective draws you in.  There is some fine photography too. Something for everyone I would venture to say.

I will leave you to find your own favourites, it is an intense couple of hours, I shall return soon to explore again the very fine Queen’s House. 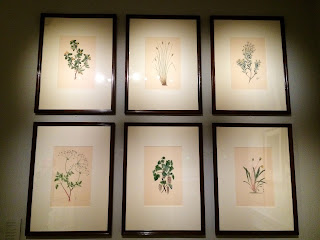 Entrance to The Queen's House is free.

You may also like to visit the fabulous SEDUCTION & CELEBRITY: Life and Times of Emma Hamilton which is showing next door at the National Maritime Museum.