O City city, - how I love thee!  No this is not a line from The Waste Land, but I have taken liberties with a partial quote.

The City of London, his inspiration, whilst Mr Eliot worked at Lloyd's of London in the Foreign and Colonial Department off Lombard Street.  As much as his literary friends wanted to get him away for his job, he did in fact seem to enjoy it, Eliot found the science of money fascinating.  He also includes his work-a-day experiences in the poem too.

Mr Eugenides, the Smyrna merchant
Unshaven, with a pocket full of currants
C.i.f. London: documents at sight
Asked me in demotic French
To Luncheon at the Cannon Street Hotel
Followed by a week-end at the Metropole

Every line loaded of course with meaning, sex, trade off and business! However, as Eliot would have wanted, make of it what you will, as it conjures up an interesting picture in the imagination, whether you know anything about Smyrna, documents of lading or where these hotels may be located, let alone a Mr Eugenides!

As an American, having planned a short stay in Europe, arrives in London and never leaves (many of us are members of this particular club!) carried with him a Baedeker (travel guide books published by the Karl Baedeker firm of Germany beginning in the 1830s).  Eliot made notes in  various sections, including St Magnus the Martyr and St Mary Woolnoth. They are likely to have come to his attention through the document 'Proposed Demoliton of Nineteen City Churches, 1920, Vol.8 : Report by the Clerk of the Council and the Architect of the Council'.  If you like horror stories this will terrify you!

T S Eliot had spent many a quiet moment of contemplation in both churches, if not more on the list. He also wrote, in support of their survival in one of the quarterly literary magazines, the Dial,  of his contempt for such a proposal whereby these buildings gave the business centre a beauty - redeems hideous banks and commercial houses which have not quite defaced ... the least precious redeems some vulgar street.

Both churches still have connections with The Waste Land today, one has a section of the poem displayed and the other possibly an inspiration for The Fire Sermon.

If you would like to know more about The Waste Land and its impact on T S Eliot join me on the walk during the Footprints of London Literary Festival which takes place anually in October. 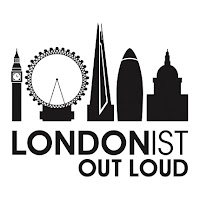 For those of you who cannot make the walk you can listen to some of the highlights on the podcast at Londonist OutLoud, by interviewer N Quentin Woolf.

With The Waste Land, TS Eliot sets his stall as the poet laureate of London. The modernist poem wraps itself through the city, like a hitch knot round an anchor. Scenes of London life and London lore abound. It is, perhaps, the only great poem that lends itself to a guided walk round the capital.

Tina is the perfect guide. We dip in and out of churches, gardens and alleyways to discover the places and objects that inspired Eliot's masterpiece. The frequent readings, given on location, help us make sense of verse that can often seem challenging. It is a mesmerising two hours. Time well spent for anyone wanting to explore Eliot's greatest work, or simply to see the City through a new filter. On Thameside sands, our guide connects everything with everything.