It has been a while since I visited the Guildhall Art Gallery and I am always enjoy this gem in the heart of the City of London. It is an interesting subject for an exhibition and also a good opportunity to delve into its huge Victorian collection, and show paintings not seen before, or for a very long time. 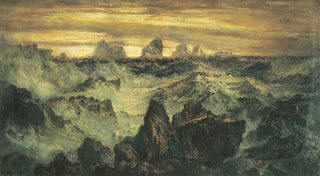 The magnificent paintings of the swells of the Atlantic waves ‘The Isles of the Seas’ (1894) Thomas Hope McLachlan (never displayed previously) certainly give you an idea of what these extraordinary, enterprising and determined Victorians were up against to run the first communications cable across the Atlantic Ocean, connecting Europe with America. It revolutionised connections between continents, messages took minutes, rather than mail which took weeks! Rightly so, this segment comes under the theme ‘Resistance’.

The exhibition is themed as Distance, Resistance, Transmission and Coding and leads you through the story of laying the heavy cables across the ocean floor from Valentia Island in Ireland to Newfoundland in Canada. It took nine years and four attempts to change communications forever.

The paintings are depict the natural elements that this engineering feat was up against, just take a look at Edwin Landseer’s ‘Man Proposes, God Disposes’ (1864) this visceral painting of polar bears, raw in tooth and claw, foraging among the remains of a wreck in frozen wastes, an image of what might be your fate. 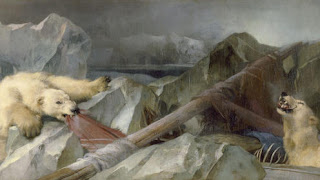 Also included is Tissot’s ‘The Last Evening’  which might allude to lack of communication, different messages passing between beholder and viewer. Perhaps it would be easier for the group to send messages to one another than talk? Moving onwards to physical coding, written in a form to shorten messages and hide content, operators used code books and ciphers. The looks and actions of this disparate group is all codes and ciphers! 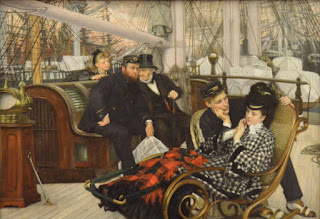 Plus ‘transmission’ alluded to in the painting of a plague victim, by making contact with a sick person one might meet a similar fate to the great explorers, survival or death, to go or to stay? This was one of the connections I found rather hard to understand initially, but acknowledge it now.

There is are an interesting collection of artefacts including huge ‘batteries’ and ticker tape machines, as well as code books. A particular favourites item looks, and indeed feels like a Victorian invention, but is in fact brand new, a creation of UCL PhD student Alexandra Bridarolli. 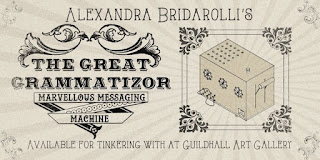 A fascinating box, inspired by ‘The Grand Automatic Grammatizator’ a story by Roald Dahl (1953). An interactive messaging machine that will produce personal ‘coded’ poems for the public to enjoy. Rotating buttons offer you choices and a lever is cranked to produce a slip of paper with a poem just for you.  There is also a code to decipher, using one of the secret code books in the display cabinet.

The exhibition is unusual and enticing, with something for all, especially ‘telegraphy’ boffins. As wells as the discerning engineer and inventor, the art lover, history researcher and for anyone in communications this is a must.  Communications as we know it today, from banks monitoring shares to mobile phones, it all began with the telegraph and the laying of cable, and I am sure there was someone who said ‘This will never catch on!’ or they will not succeed!  Succeed they did against adversity and this exhibition goes some way to explore and celebrate it! See my special message to you below, happy decoding!