On Margate Sands
I can connect
Nothing with nothing

On one of the hottest days of the year I took several members of “A Journey with The Waste Land Research Forum” for a walk in the City of London, introducing them to the ‘psycho-geography’ that influenced T S Eliot when writing The Wasteland (pub. 1923 Hogarth Press).

The group came all the way from Margate and were having a grand day out organised by the Curator and Research Curator of the Turner Contemporary for the project, which will see the Margate community create an exhibition influenced by Eliot’s great poem, due to open 2018.

In turn I was invited to join the “Fallen Leaves Festival” on the 8th October in Margate to ‘talk my walk’ T S Eliot in the City, as a walking book. The outing included site readings of “Burnt Norton” we set out from the Turner Contemporary to The Garden Gate, more of this later. The walk was to make connections with rhythm, rhyme, memory and walking. 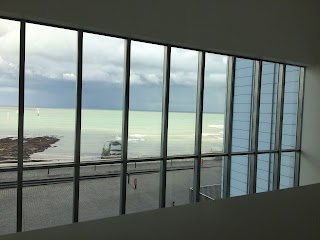 We met in the foyer of the Turner Contemporary, I will be writing about the gallery in more detail in a separate blog, introductions were made and each walking book introduced themselves and their subject, and we were:

‘Shoulder to Shoulder – tales of the Broadstairs Town Shed’
Claire Shelton
I have been involved with the Shed project since 2014. I’m project manager, fund raiser, community liaison, and day to day co-ordinator. http://www.broadstairstownshed.org.uk/

‘Experiential Research, Materials and Spaces’
Catherine Richardson
With an art college background, followed by studies in literature and medieval and early modern culture and society, I work on the history of material culture – how the physical world shaped and was shaped by people’s actions, interests and beliefs. There is more about all of this here: www.kent.ac.uk/english/sta ff/richardson.html

‘Here, There, Now and Then: Seeking the Self Through Space, Place, Time and Tides’
Louisa Love
Louisa Love is a Kent-based contemporary artist operating across sculpture, film, writing, research, walking, organisation and social/collaborative activity. She is interested in the nature and pluralities of artistic production, exploring the complex relationships between things, thoughts, knowledges and different modes of doing as a consideration of identity and the negotiation of self within the contemporary world. Experimental processes of drift and psycho-geography often inform her work. www.louisa-love.com  www.dadonline.eu

‘The Art of Walking’
Sonia Overall
Sonia Overall writes fiction and poetry. She has a strong interest in psycho-geography and site-specific writing, form, intertextuality and performance-based approaches to text. Sonia has written and abridged work for street theatre and has published two novels, A Likeness and The Realm of Shells (HarperPerennial) and a chapbook of poetry, The Art of Walking (Shearsman).
www.soniaoverall.net
www.women-who-walk.org #soniaoverall   #womenwhowalknet

Plus All The Leaves Are Brown/Cliftonville Dreamin'
Julia Riddiough - Margate based artist with an active interest in exploring and investigating the archive, looking at the space between fact and the fiction. www.abrooksart.com and juliariddiough.com 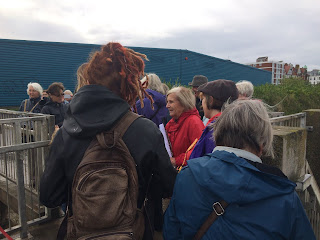 The organiser Elspeth Penfold, designated the first people to join a walking book, thereafter seek your walking book.I was able to talk to at least eight people in the group, by changing my companion after one or more stops. We were also presented with a ‘spiral of rope’ an ancient Inca ritual of unknown origin, whereby you would knot it enroute as your mood took you.  I used mine as a badge on my sleeve and put in one knot to acknowledge the whole experience.

As we set off the heavens opened, umbrellas were at the ready, and remember these folk live on the Isle of Thanet and know about the changing weather on the coast, so dressed appropriately!  We set of in a westward direction, which was great for me as I had explored most of the beach in front of the town.  We headed for Fulsam Rock by the Fort Lower Promenade our destination Northdown Park. 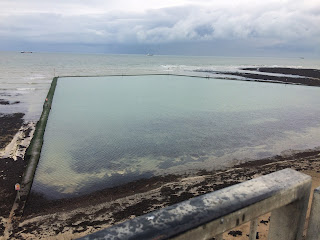 I do not think anyone really noticed the rain and eventually it eased off. I enjoyed the readings and especially the talks with my walking audience, several of which had not yet read the The Waste Land, which was an interesting situation to overcome. I focussed initially on some of the City landmarks, London Bridge, St Magnus the Martyr and St Mary Woolnoth. Why he might have been drawn to them. The churches particularly were in the news at the time of his composing the poem, due to be demolished, he wrote of their enhancing the cityscape. Also London Bridge the conduit between home and work, life and death, hope and despair, and Eliot often mentions the ‘Sweet Thames’, not only in terms of ancient lore but this also connects him with the great river he grew up close to in his home town of St Louis.

‘Depressing and hopeless’ were words oft used to describe the poem.  I asked my companions to perhaps look at the poem in another way, for instance to reflect more on the construction of the poem, its staccato lines, followed by episodic, illustrative stanzas, as well as the dialogue and monologues, rather than hang on every word. Or view it in all its modernity, it was way ahead of its time, enjoy its complex fabrication, a collage made of words. Also there is no need to understand every word of it, that is not what Eliot would have wanted. Function over form, ‘feel’ the poetry rather than try to comprehend it. Let it feed your own imagination and emotions. 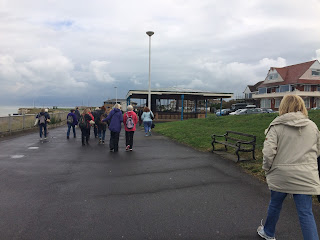 It has been a long time since I had no idea where I was going or the end stop, so it was a refreshing and relaxing few hours just following the group, along the beach, up stairways, through cliffs, along roads until we reached a library.  The grand finale was a delightful poem first conceived by the poet Keith Grossman when he was nine, and somewhat troubled. You can read it in full here :
http://elspethpenfold.blogspot.co.uk/2016/10/fragments-and-thoughts-poetry-by-keith.html

We then met with the Garden Manager, Paul Boyce of The Garden Gate, who we followed to a ‘secret’ garden created by the community to enjoy gardening at their own pace, Monday to Friday.  At the weekends the site is open to events and fundraisers. A beautiful place which includes a welcome cup of coffee and on this occasion delicious pizza fresh from the outdoor oven. Highly recommend a visit. 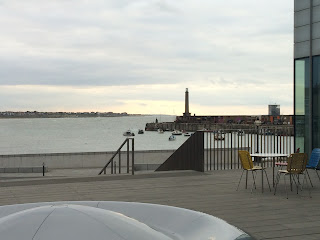 So ended an eventful afternoon, made new friends and experienced new places, after a short bus ride we ended where we started at the Turner Contemporary. By chance met up with more of the Forum who had been to a talk in one of the galleries. They kindly invited me to join them for a coffee and creative chat.

So I came full circle … 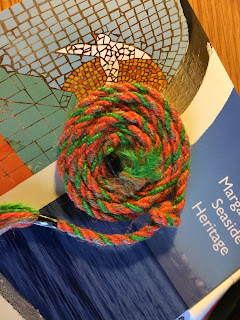